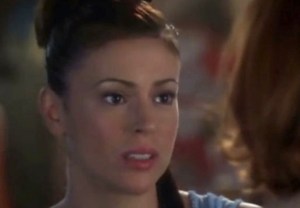 What we’re gonna do is go back — waaay back — for this week’s TVLine Mixtape.

What follows are some excellent songs from TV episodes past, complete with artist and album information in case you want to add them to your permanent collection.

We chose tunes that stuck in our memories, but we know you’ve got favorites, too. So check out our TVLine Mixtape playlist — Throwback Edition — and then hit the comments with your favorite TV jams from yesteryear! And remember: You can always submit questions or suggestions re: TV music on Twitter @NiveaSerrao. SERIES AND EPISODE | Chuck, “Chuck Versus the Colonel” TITLE | “Creature Fear”
ARTIST | Bon Iver
ALBUM | For Emma, Forever Ago (2008)
WHY IT ROCKED | Who could forget the song that plays the first time Chuck and Sarah kiss without it being a required for a mission — or because they thought they were going to die? As the song begins to swell,  the couple finally abandons all restraint , giving themselves — and the audience — what they’ve wanted for so long. TITLE | “Feels Like Today”
ARTIST | Rascal Flatts
ALBUM | Feels Like Today (2004)
WHY IT ROCKED | While The CW’s Flash gets ready to debut this fall, it’s easy to forget that “Bart Allen” appeared on Smallville, first meeting Clark Kent long before he’d begin donning a red cape.

SERIES AND EPISODE | Charmed, “Sam I Am” TITLE | “Do You Realize”
ARTIST | Flaming Lips
ALBUM | Yoshimi Battles the Pink Robots (2002)
WHY IT ROCKED | Piper discovers her unborn child can use magic, Paige gets her first charge as a whitelighter and meets her biological father and Cole finally gets the hint that he and Phoebe aren’t getting back together. It’s a big episode for the sisters, but it’s an even bigger night for P3 as Phoebe’s favorite “crew” performs. TITLE | “The Happy Wanderer”
ARTIST | Frank Weir
ALBUM | Driving Down Memory Lane (2010)
WHY IT ROCKED | Weir’s marching song not only captures Walter’s often dreamy disposition when on drugs and off, it also fits in perfectly with the feel of his Monty Python-inspired hallucination, offering us a glimpse into what goes on in the older Bishop’s mind.

SERIES AND EPISODE | The O.C., “The Cliffhanger” TITLE | “For the Widows In Paradise, For the Fatherless In Ypsilanti”
ARTIST | Sufjan Stevens
ALBUM | Greetings From Michigan – The Great Lake State (2003)
WHY IT ROCKED | As the soft strains of Sufjan’s banjo play over Johnny’s beachside funeral, it serves as a sad reminder that despite everything Ryan and Marissa did, they were unable to save their friend.

SERIES AND EPISODE | The Middleman, “The Ectoplasmic Panhellenic Investigation” TITLE | “Sweetest Tooth”
ARTIST | Camphor
ALBUM | Drawn to Dust (2008)
WHY IT ROCKED | As Tyler describes his quest to meet his “soulmate,” Wendy takes Lacey’s advice and goes after her man, filling in some of the missing details and making it quite evident that the mystery girl he was looking for was her all along. TITLE | “All Along the Watchtower” (Jimi Hendrix Cover)
ARTIST | BT4
ALBUM | Battlestar Galactica Season 3 Official Soundtrack  (2007)
WHY IT ROCKED | Starbuck appears beside Apollo in her viper and reassures him that not only is she alive but that she knows where Earth is. “There’s too much confusion” says the song, perfectly expressing our emotions in the moment as we collectively exclaimed “What the frak?!”