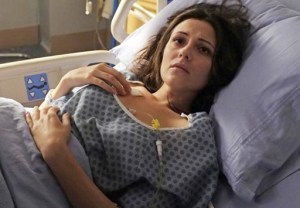 Chasing Life‘s Italia Ricci wasn’t exaggerating when she told TVLine to brace for a “vicious” summer finale. (Warning: many spoilers ahead!)

Between April checking into the hospital and getting dumped (!) by Dominic, Greer’s parents forbidding Brenna from dating their daughter, Sara and George hashing out the effects of their kiss, and Leo (possibly) taking his final breath, there isn’t a single aspect of the series left uncomplicated.

TVLINE | I’m kind of freaking out about Leo. How soon will we find out whether or not he’s OK?
Our Christmas episode, which I understand will air in December, will pick up right where we leave off from the finale.

TVLINE | OK, so the episode will air in December, even though it’s not “Christmas time” on the show?
No, our use of Christmas is something that helps April through the remainder of her treatment. We call it “Christmas in May.” When April realizes that she’s starting to lose her hair, the family decides to throw her a Christmas, which is her favorite holiday, while she’s still in the hospital and starting to struggle with this loss.

TVLINE | Works for me! Now, let’s talk about April and Dominic. What went into your decision to split them up?
We knew we wanted these first 10 [episodes] to end with her treatment, and we knew we wanted April to hold this secret of her illness from Dominic until the finale. The outcome is just what made sense throughout his journey. He’s this guy who had a string of superficial relationships, which made April really hesitant of trusting him with this side of her life. It would have been too easy for her to come clean and for him to say, “I understand and I accept it because you’re sick.” Now, what he has to deal with in the aftermath of this is that he dumped a girl who was sitting in her hospital bed. And it was heartbreaking for him, too; he made this grand, romantic gesture of traveling back to Boston to be with her, then realized she never really thought he could be there for her. It’s something that will inform his character in the next 10.

TVLINE | But it’s safe to say their story isn’t over yet?
That’s correct. They’ll still be working together, but now as exes. There’s plenty of [built-in drama] when people have to see each other every day after going through something messy and personal.

TVLINE | That there is. On a side note, thank you for not killing Saul. That gave me some hope.
I’m glad that’s how you took it, because that’s how we wanted to end the 10. When we talked about the fate of Saul, the assumption is that we’re killing people off left and right on this show. We’re not The Walking Dead. Saul survived.

TVLINE | Brenna also went through a change this week. She seemed genuinely remorseful for everything she’s done.
In looking at all of our characters and tying them to April’s struggle, we really wanted Brenna to start to own up to her sins of the past. She’s been this pain-in-the-ass kid, as we saw from the pilot, but now she’s really starting to take responsibility for herself. And it’s a journey; she’s not suddenly just going to become “the good girl.” Nobody changes that drastically overnight, but this is the beginning of a difficult turn for her.

TVLINE | Speaking of difficult, will she and Greer try to stay together in secret?
Greer will be back in the next 10, and they’ll have to deal with the realities and the new challenges of their relationship, which we’ve come to refer to as Juliet and Juliet.

TVLINE | And now, for the weirdness. Sara and George briefly discussed their kiss, but is that it for them? Or could that really become a thing?
We’ll carry it through into the next 10. We’ll continue to explore their relationship, but also the consequences of … or, rather, the impact their relationship could potentially have on the family, given how much this family has already suffered from secrets and relationships that weren’t always something everybody would necessarily support.

What did you think of the Chasing Life summer finale? Do you think Leo survived? Drop a comment with your take on the episode, and your hopes for the future, below. 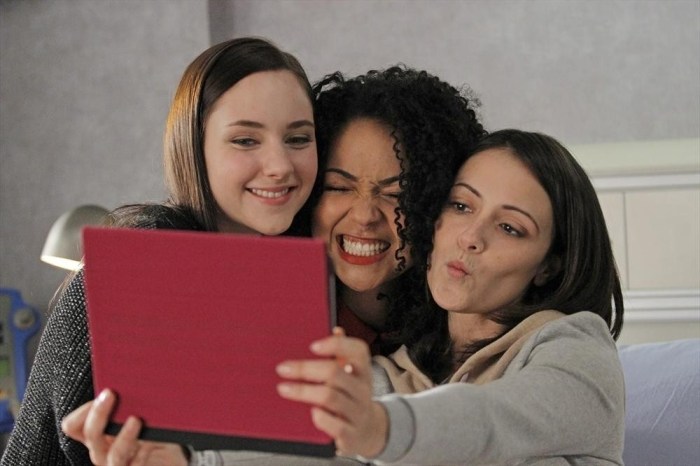