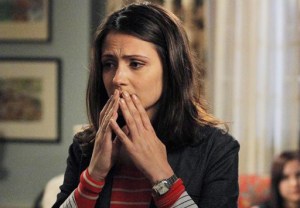 THE EPISODE | “The Family That Lies Together”

THE PERFORMANCE | Ricci is, without a doubt, one of this summer’s brightest breakout stars. As 24-year-old leukemia patient April Carver, Ricci is taking Chasing Life viewers on an emotional, unexpected journey into an uncertain future; with a single tear-stained word, she’s lifted our spirits, then immediately turned around and broken our hearts.

April has spent the past four weeks keeping her condition a secret from her family, desperate to retain some semblance of the life she knew before — but her security bubble finally popped this Tuesday, as she was forced to reveal her illness in a powerful scene that showcased the true range of Ricci’s talents.

There was no group hug, no swelling music to cushion the blow — just a scared young woman struggling to face the family she didn’t want to burden with her truth. Finally, she managed to speak: “I have leukemia.” April couldn’t even face her family as she said it, and from the look on her face, you could tell she barely believed it herself.

The emotional weight of her confession, coupled with the recent discovery of her half-sister — the product of her late father’s affair — proved too much for April to bear. Falling into the arms of love-interest Dominic, Ricci poured out four weeks of April’s bottled emotions, tears we expect were shared by many watching from home.

While it may be hard for young viewers to imagine themselves experiencing either of April’s predicaments, much less both, Ricci’s realistic portrayal of a young woman facing immeasurable odds has made the journey an accessible one. HONORABLE MENTION | HBO’s The Leftovers has a tendency to put us through a gamut of emotions, and Liv Tyler encapsulated each one of them in her portrayal of Meg Abbott in this week’s episode. In just a handful of scenes, Tyler infused in her desperate character confusion, exasperation, sadness and a few fleeting seconds of hope. And considering The Leftovers’ basic premise is one that we can’t fathom happening in real life, Tyler’s ability to make Meg relatable deserves the highest praise. As she turned to Amy Brenneman’s Laurie and said, simply, “I don’t want to feel this way anymore,” we felt deep compassion for a character we’d only just met.

HONORABLE MENTION | All season we’ve watched as Salem‘s Seth Gabel kept Cotton Mather’s issues with his father close to the surface, revealing every sting as Increase continued to belittle and insult him both in public and in private. But as Cotton defended John Alden at his trial, Gabel showed us a man coming into his own, denouncing Increase’s interrogations-by-torture with a fierce, newfound confidence. However, it wasn’t long before he let that same confidence crumble, allowing us to see not only how deeply betrayed he felt by John’s secret past, but also how he’d become Cotton’s best (and only) friend.