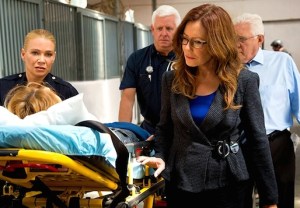 This week on TNT’s Major Crimes (as Mary McDonnell herself foretold), Captain Sharon Raydor declared, “Enough is enough” when it comes to her ward Rusty’s forever despicable biological mother.

Midway through Season 3’s summer finale — which was an at-times intense, Kiss the Girls-esque tale of disappeared young women (can plucky Kate be a part of any S.O.B. spin-off?) — Rusty visited his mom at the county lock-up, where she’d been stashed after being nabbed on a shoplifting charge. To make bail, Sharon Beck says she just needs $500, and to that end asks her son if he still does that “work,” as a rent boy. When Rusty roars his outrage that his own mother would suggest he revisit such a part of his life, Sharon counters that maybe Captain Raydor could help out…?

Oh, be careful what you wish for, witchy woman, because when Raydor shows up at episode’s end on the other side of that glass, it is not to drop off five Benjamins. Rather, she is there to lay out the terms of the “deal” she has cooked up for Rusty’s mother: One year in county lock-up, provided she stays on the straight and narrow — “not one step to the left or to the right” — subject to random drug tests and the watchful eye of imprisoned CIs.

“If you don’t remain sober, or if you violate the statues of personal conduct, I’ll personally see to it that the six-year tail of your sentence is carried out to the letter, at an upstate prison,” Raydor makes clear. When Beck squawks at the overly rigid terms, Raydor laments, “Anything more I could do to you will require a trial.”

Beck throws a couple of last, utterly desperate jabs — first, playing the “What about mah boy?” card (to which Raydor quickly affirms, this deal is for Rusty’s benefit), and then lamely warning Raydor she’s bought herself a heap of trouble.

To that last taunt, Raydor smirks, “You’re the one in a blue jumpsuit surrounded by guards. And I’m the one getting up to go home.”

What did you think of the summer finale’s kidnapping case, and the Showdown of the Sharons?