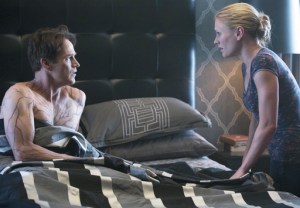 Like an unclaimed Diet Coke in the office fridge*, Sarah Newlin’s miracle Hep-V cure was rife for the taking on Sunday’s True Blood. But which infected vamp refused to take a sip?

It wasn’t Eric; he jumped at the chance to suck down Sarah — ahem, New-me‘s — life juice. In fact, he even did a self-congratulatory howl (RIP, Alcide!) after tossing her aside like a right-wing rag doll.

The answer, of course, is the ever-noble Bill Compton, who believes that dying of Hep-V is simply the fate he must endure as punishment for being a creature of darkness or whatever. (To play Devil’s Advocate, maybe this is also Bill’s punishment for putting us through so many old-timey flashbacks this season.)

Now, let’s see what else went down in (and around) Bon Temps this week…

FAIRY BIZ | A few out-of-nowhere loose ends were also tied up this week, including Bill finally telling Sookie why Queen Sophie-Anne sent him after her in the first place. Apparently his original orders were to find Sookie, determine if she was part fairy, then bring her to Sophie-Anne… who planned to breed her. You see, Sophie-Anne caught wind that Queen Mab (remember her?) intended to bring all fairies and halflings back to her realm for good, so breeding Sookie would have meant keeping more light-people on our side. As random as it was, this was a surprisingly clever way of explaining some of the series’ weird, lingering plot holes. Plus, it was nice to see Beell and Sookeh getting all Season 1 with each other, even if he was mid-death. VIOLET IS BLUE | The more Violet lets her freak flag fly, the more I find myself endeared to her — I invested nothing in her relationship with Jason — so imagine my delight this week, as the madwoman welcomed Jason, Jessica, fairy girl and that other guy to her world of pain. The following is a breakdown of the torture she planned to inflict on each member of the motley crew:

Fortunately, we’ll never have to hear any of her words ever again, because  Hoyt crashed the party with his plus-one, a wooden bullet aimed right at Crazy Pants’ forehead. Bang! Dead.

‘A TASTE OF THE FAMILIAR’ | As any true hero should, it looks like Hoyt is also going to get the girl — though maybe not the girl we’ve been expecting. After fighting with Bridget about not wanting to have kids, then going to drop off a bag of blood at Chez Compton, it seems like we’re headed for a full-on Hoyt/Jessica reunion before the series finale. Granted, Jessica and Jason also shared a couple-y moment (she said their relationship is the least complicated one in her life), but I’m still betting on Hoyt and Jessica. She’s the love of his life, and if there’s one thing Jason knows how to do, it’s bounce back into bed with someone else; they’ll all be just fine. ONE LAST TRIP | More good news: Tara’s freaky, tongue-speaking side plot — which, like Tara herself, seemed like it was never going to go away — finally reached its conclusion this week, sending her into the afterlife with a clear conscience and an expertly woven side-braid. It turns out Tara had buried a gun in the front yard of her childhood home, a gun she wishes she’d used on her abusive father, thus saving Lettie Mae from a lifetime of alcoholism, demonic possession, insane hair, etc. The two shared a nice little moment, as Tara forgave her mom for being a crazed mess. (Moment of honesty: This storyline’s pay-off was so weak, I’m starting to think it was all just an elaborate excuse for Mama Thornton to get her V fix.)

* Sorry (not sorry) to whoever’s Diet Coke that was.

OK, your turn to talk: Were you satisfied by Tara and Violet’s conclusions? Do you think Bill will change his mind? And who do you think Jessica should end up with? Watch our interview with Stephen Moyer below, then drop a comment with your hopes for the final two episodes. 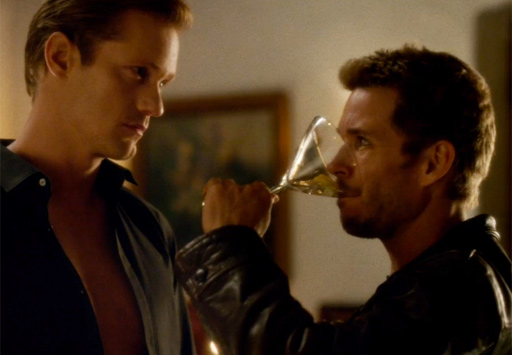