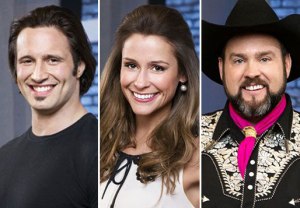 All too often on Food Network Star, contestants are told to streeeeetch their segments just a few seconds longer. And on the reality competition’s hourlong finale, there was a lot of stretching for time.

Before we could find out whether Nicole, Lenny or Luca would become the next Food Network Star, all of the Season 10 finalists rejoined their judges for a look back at the past few weeks. Here’s the CliffsNotes version:

* A number of video packages roll, zeroing in on everything from the contestants’ crushes on the judges — as well as everyone’s infatuation with dreamy Luca — to the judges’ goofy behind-the-scenes moments, to the catty comments contestants made behind each others’ backs. (And fourth-place finisher Sarah is at the heart of the drama, calling Lenny a “sidewalk entertainer” and telling Chris he’s “dead to her” after he won’t share ingredients. Relax, girl!)

* We also get a look at the Star Salvation series — led by last season’s champ Damaris Phillips — which helped the ousted contestants work on their camera skills, and ultimately put Luca back in the game. (And yes, Luca confesses, he does render women incoherent on a frequent basis, but he chalks that up to his molto bene genes.)

But the results do eventually come. New Jersey native Nicole and her “coastal cuisine” POV are eliminated first, and between Lenny and Luca, the winner is… Lenny!

But the real mystery is: Will he ever take off that goofy cowboy hat in front of the camera?

How do you feel about Lenny’s Food Network Star victory? And will you tune in to his show later this season? Hit the comments!