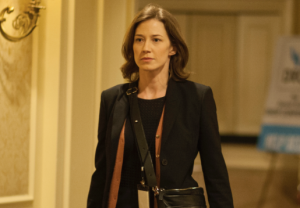 THE PERFORMANCE | Say what you will about The Leftovers — it’s depressing, it’s confusing, it’s [insert adjective of choice here] — there’s no denying that it’s offering its cast one golden opportunity after another to shine through the darkness. And when Coon got hers, did she ever run with it.

Already, we’d been blown away by the actress’ understated, naturalistic work as Nora Durst, an object of fascination and pity around Mapleton since losing her entire family in The Sudden Departure. But in this Nora-centric episode, Coon was able to show us more — lots more — and more was even better.

First, there were the horrors of the bereaved character’s day-to-day life (which found her buying her kids’ favorite cereals and hiring a hooker to shoot but not kill her). Then, there were the marvels of her visit to a Sudden Departure-related convention (among them, her enviably sly handling of a sleazy conventioneer and her attack on an opportunistic author). Finally, there was the shock of her breakdown with Holy Wayne and the joy of her second chance with Mapleton’s police chief (Justin Theroux, with whom Coon has off-the-charts chemistry).

Through it all, the onetime Tony nominee made us feel for Nora rather than feel sorry for her. And for this triumph, Coon is beyond deserving of this moment in the spotlight. HONORABLE MENTION | Men don’t come much tougher than Longmire’s titular sheriff, which makes Robert Taylor’s penultimate scene in the Season 3 finale all the more impactful. Having finally gotten to the bottom (or at least so he thinks) of the mystery surrounding his wife’s years-ago murder, Walt brings her ashes to the hillside where they once exchanged vows, declaring, “It’s time to let you go.” And as Martha’s remains were gently released into the wind, Taylor showed us great wave of emotional release Walt felt. All this time, Walt kept his wife “on the kitchen shelf” so that she could keep him “in line.” But now, he needs her to not see what he must do, with regards to Jacob Nighthorse. Taylor’s performance dispatched with an old saw, proving that real men do cry. HONORABLE MENTION | Being a Stein isn’t easy and this week The Honorable Woman‘s Katherine Parkinson showed us how hard it is to be married to one. Reluctantly accompanying her husband to yet another Stein business event, Parkinson’s Rachel found herself bearing the brunt of a protestor’s paint bomb. Later, splattered in paint and faced with her young daughter, Rachel snapped, revealing a mother concerned about whether her children, as Steins, were the intended targets of Kasim’s kidnapping. As she asked Nessa whether her plans for the Middle East were worth the lives of her children, it became clear that Rachel has been the tolerant woman.