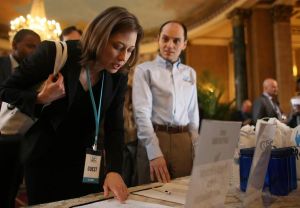 This week’s episode of The Leftovers is fantastic for three — count ’em, three — reasons: 1. It’s all about Nora (who, next to Garvey, is the series’ most likeable character). 2. Carrie Coons is flippin’ brilliant in the role (wouldn’t you agree?). 3. Nora actually ends the hour in a better place than she begins it (and when has that ever happened to anyone on this show before?). As an added bonus, the path that she takes to a brighter outlook is a fascinating and twisty one. Follow along, and I’ll lay out a trail of bread crumbs…

COMFORTABLY NUMB | Early on, we learn what Nora’s day-to-day life is like in the wake of her family’s disappearance in The Sudden Departure: She chucks the cereals that her kids are no longer around to eat and restocks her cupboards with the exact same items, she stalks the preschool teacher with whom her husband was cheating, and she orders up a call girl to shoot her while she’s wearing a Kevlar vest. Pretty grim, eh? Later, while leaving the courthouse after dissolving her marriage, the newly single gal runs into Garvey, who is there — what are the odds? — for the same purpose. Their chemistry evident as it always is, she suggests that, instead of go to a conference for her employer, the Department of Sudden Departures (which only sounds like it’s an offshoot of the Evil League of Evil), she run off with him to Miami for the weekend. When he says that he can’t because of Jill, she replies, “F— your daughter” and immediately regrets it.

9 TO 5 | At work, before leaving for the conference, Nora is asked by her boss why everyone she surveys answers yes to question No. 121 (which we later learn is, “In your opinion, do you believe the Departed is in a better place?”). She has no idea. She isn’t leading them, she assures him. And with that, off she goes to NYC, where she’s greeted by throngs of picketers (among them, members of the Guilty Remnant) and finds that her ID badge has been stolen by an imposter hell-bent on informing attendees that the Department only exists to give “the illusion of progress.” (This is why Nora is issued the kind of badge that gives the episode its title: “Guest.”) Even when she has a little fun, it’s bittersweet: The other attendees with whom she parties — unaware of her losses — are grotesquely insensitive about those whose loved ones were taken.

AND NOW FOR SOMETHING COMPLETELY DIFFERENT… | After busting the fake Nora, the real one meets — and goes off on — the author of a book capitalizing on the grief of those affected by The Sudden Departure. This, in turn, draws the attention of an oddball who’s been running around asking conference-goers if they want to feel the way they do. “Yeah, I wanna feel this way,” Nora hisses when he tries his line on her. “F— off.” But rather than f— off, he reels her in by offering a chance to reveal what a fraud the author is. All she has to do is follow him to a rundown apartment (Ack! Stranger danger!), Paypal over a grand (Say what?) and have a chat with… holy s—, it’s Holy Wayne! In no time, Nora’s totally distracted from bringing down the author and is stepping into Holy Wayne’s healing embrace. And maybe there IS something to it? Because afterwards, she buys new and different groceries, she stops stalking her husband’s mistress, she gets a no to question No. 121 and, to top it all off, she gets invited out on a date by Garvey. And unless I’m mistaken, it’s the most hopeful moment the show has ever given us.

OK, your turn. What did you think of the episode? Can Holy Wayne really lighten people’s loads, or is his only power the power of suggestion? Hit the comments!