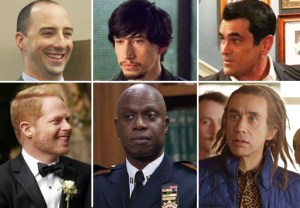 Modern Family‘s win streak in the Emmy race for Best Supporting Actor in a Comedy Series came to an end last year — a development that lends a little unpredictability to the 2014 proceedings.

Veep‘s Tony Hale will go for back-to-back victories come Emmy night, while 2011 champ Ty Burrell will carry the banner for Modern Family, along with five-time nominee Jesse Tyler Ferguson. (Eric Stonestreet, winner in 2010 and 2012, didn’t make the ballot this time around.)

The race is rounded out by Girls‘ Adam Driver (who scored his first nod last year) and a pair of first-timers (to the comedic acting side of Emmy, anyhow): Fred Armisen (Portlandia) and Andre Braugher (Brooklyn Nine-Nine). Armisen, it should be noted, has a prior pair of nods for Outstanding Writing for a Variety Series, while Braugher has seven prior nominations (and two wins) — all for dramatic roles.

Next week, we’ll post another five “Who Should Win” Emmy polls, so come back to TVLine.com every day to weigh in on who’s most worthy of TV’s biggest honor!