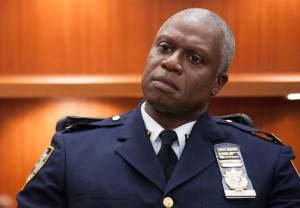 You can never have too much of a good thing, or so the old saying goes. But in Andre Braugher‘s case, you can have so many Primetime Emmy acting nominations (eight to be exact), that you’ll need a few moments — and perhaps a little help — to remember ’em all.

Asked during a phone conversation how it feels to have scored nods for four separate series-regular roles (in addition to two nominations in the miniseries/movie genre), Braugher quickly lists Homicide: Life on the Street (for which he won in 1998), Men of a Certain Age and Brooklyn Nine-Nine (for which he was recognized this morning in the Supporting Actor in a Comedy race).

But wait — a fourth series, Braugher wonders. Reminded of his 2001 nod for Lead Actor in a Drama Series for the short-lived Gideon’s Crossing, the actor erupts with laughter. “Wow! What a blast from the past!”

For more on Braugher’s thoughts about Brooklyn Nine-Nine and his “long and rewarding career,” read on:

TVLINE | Aside from a stunt-coordination nod, you’re the only other nomination from Brooklyn Nine-Nine‘s freshman season. What is it like to carry the show’s Emmy weight on your shoulders?
The nomination is a representation of what [series creators] Dan [Goor] and Mike [Schur] and [star] Andy [Samberg] have been able to accomplish in terms of this show. There was no way for my character [Capt. Ray] Holt to have stood out if the show didn’t stand out. I’m a part of a larger piece — the show is terrific, and it’s still discovering an audience.

TVLINE | I think a lot of the show’s fans had expected more nominations — especially since the show won Best Comedy and Andy Samberg won Best Lead Actor in a Comedy at the Golden Globers?
Globes voters have an entirely different perspective and mandate than the Emmys. I didn’t think the Golden Globe recognition would be repeated by the Emmys. Historically, if this show is lucky enough to survive for a third and fourth season, there’ll be many more opportunitues for Emmy nominations — especially because Mike and Dan have such a great track record of creating this world of the loveable goofball. You only have to look at Parks and Rec to know that while they may start slow, they create very detailed, interesting universes.

TVLINE | A lot of your character’s funniest moments come from total silence or a stern look or a single discouraging word. Is that fun to play?
It’s a lot of fun. I get to go to comedy grad school with some excellent comedians. Andy, Joe [Lo Truglio], Chelsea [Peretti], Terry [Crews] — I get to watch them like a hawk on a daily basis. I’ve learned a lot about the art and craft of comedy from watching these guys. It’s a joy for me, and it’s very gratifying to be nominated not in an overtly comedic role, but in a role that supports the comedy — the stakes, the underlying reality of our flaky little borough. I’m happy to be able to do that and learn at the same time.

TVLINE | How does it feel to have been nominated for four series with such wildly disparate tones?
It blows my mind. I’ve been a very fortunate man, and I’m the first to acknowledge that. I strive hard to succeed — not in an overt manner of being a celebrity, but in being the finest actor I can be. So, it’s mind blowing to be recognized — and I hope there are other mind-blowing things to come in the course of this career.