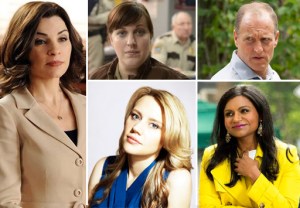 The 2014 Emmy nominations were, as per usual, both thrilling and infuriating (mostly the latter). For every inspired nod (congrats, Kate McKinnon!) there was one that had me scratching the skin off my scalp (no best drama nod for The Good Wife?!). So without further adieu, I give you the good, the bad and the downright ugly from this year’s list.

I’m Super-Ecstatic About:
* The Academy recognizing True Detective‘s unsung hero Woody Harrelson (in addition to, of course, Matthew McConaughey).
* Masters of Sex‘s Lizzy Caplan scoring a best lead actress nod. Ditto co-star Allison Janney (in guest actress).
* The Good Wife‘s Josh Charles getting recognized for his [SPOILER ALERT] final season. Also, co-star Julianna Margulies scoring a nod after being overlooked last year.
* All the love for Fargo.
* The best comedy nomination for Silicon Valley.
* Andre Braugher sneaking in for Brooklyn Nine-Nine (the show’s only major nod).
* Matt Bomer scoring a nod for his revelatory Normal Heart work. (Pretty pleased about all of the love for Heart.)
* All the nods for Orange Is the New Black.
* SNL Kate McKinnon’s best supporting actress nod.

I’m Rolling My Eyes About:
* The Newsroom‘s Jeff Daniels stealing that sixth best actor slot from The Americans‘ Matthew Rhys (or Masters of Sex‘s Michael Sheen).
* The requisite nod for Downtown Abbey‘s Maggie Smith. Love her but enough is enough.
* Mike & Molly‘s Melissa McCarthy getting nom’d for lead actress instead of… so many stronger contenders?!

I’m Super-Pissed About:
* The Good Wife getting shut out of the drama series category for its best season yet. Also, no writing or directing nods for two of this season’s best hours of television, “Hitting the Fan” and “The Last Call.”
* The Mindy Project getting the shaft.
* Zero recognition for The Big Bang Theory‘s sterling supporting cast (save for Mayim Bialik’s nod).
* No Tatiana Maslany? WTF?
* The absence of Bates Motel‘s Vera Farmiga makes me a little psycho.
* No love for Inside Amy Schumer‘s leading lady.
* Masters of Sex failing to score a best drama nod.
* The absence of Orphan Black‘s Tatiana Maslany (because it bears repeating).
* Hannibal getting bubkes.
* The Walking Dead‘s Melissa McBride getting overlooked.
* No nod for Scandal‘s Bellamy Young.
* Nada for Sons of Anarchy‘s star-crossed lovers Charlie Hunnam and Maggie Siff.