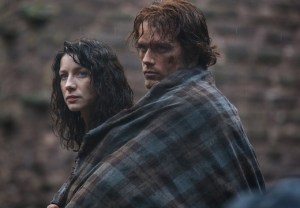 If you’ve ever watched Game of Thrones and wished for fewer dragons and more kilts, there’s a good chance you’ll find Starz’s Outlander a bonny addition to your DVR queue.

For the unititated, here’s a verra short history: The unlikely pair of 18th-century Scottish highlander Jamie Fraser and World War II-era combat nurse Claire Randall first met readers in 1992, when the Diana Gabaldon novel on which the series is based first hit bookstores. This Saturday at 9 pm — more than two decades later — Starz is bringing the genre-defying work to the small screen.

Gabaldon’s sweeping book series follows Claire as she’s inexplicably thrown back in time to 18th-century Scotland, where she meets and eventually falls for the strapping (and damn near perfect) Jamie. The title is a translation of Sassenach, the derogatory term for a British person, which becomes Claire’s nickname. Fans have been dream-casting a screen adaptation for years, a phenomenon Caitriona Balfe and Sam Heughan encountered when they were announced as leads in the premium cabler’s Ron Moore-helmed drama.

Before Balfe’s audition, “I was Googling and I was like, ‘Wow there’s a lot of people who love this,'” the Irish actress said during a visit to TVLine’s New York offices.

“I remember when they cast you,” chimed in Heughan, a Scot, who sat beside her. “We hadn’t met yet, and I was watching your Twitter account just go —”

“I went from my three followers,” she interrupts, laughing, “to —”

The intense scrutiny of those thousands of Outlander enthusiasts, though, is nothing compared to the trials Claire undergoes after her tumble through time. In the pilot alone, Balfe’s British character is captured by two different factions, nearly raped, called upon to do some very rudimentary doctoring and accused as a spy – all while wondering how to return to the 1940s and her husband, Frank (Game of Thrones‘ Tobias Menzies, who – in a neat bit of casting — also plays Frank’s ancestor Black Jack Randall). “It was very important to all of us, to Ron and Tobias and myself, that we really show that there was a really strong love between her and Frank,” Balfe said.

She adds: “Everyone knows there’s this great love story that’s coming between Claire and Jamie, but it’s so important to show where this conflict is within her. She’s constantly trying to get back home. She really did love Frank… The 1940s, that’s her time. She’s a woman of that time.”

To Jamie, who Heughan describes as “lost” at the beginning of the series, Claire’s anachronistic independence proves quite attractive.

“She surprises him,” the actor said in his soft, native brogue. “Suddenly, he finds somebody he cares about. He’s like, ‘My god, I’ve got to deal with this, and I’ve got to look after her.'”

But it soon becomes apparent that young Mr. Fraser can use some looking after, as well. In the series’ first hour, he’s the one in need of Claire’s medical expertise; later episodes will reveal that the redheaded Scot has been flogged in the past (thanks to prosthetics, “there’s a part of his back that looks like whoever did it really enjoyed it,” Heughan notes), that he’s in the middle of a complicated clan power struggle and that he’s – gasp! – a virgin.

At the time of Balfe and Heughan’s visit, they hadn’t yet filmed a very intimate moment between Jamie and Claire — and were charmingly bashful when asked about it. “It’s funny, I think we’ve both kind of avoided it,” Heughan said, causing Balfe to laugh.