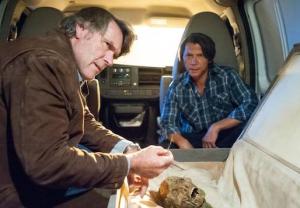 A&E’s Longmire on Monday night wrapped Season 3 with an audience of 3.7 million total viewers and a 0.6 demo rating (per TVByTheNumbers). That’s up 9 percent and a tenth week-to-week, and on par with its season opener (which did 3.9 mil/0.7).

Versus its sophomore finale, however, the drama was down 16 and 45 percent. Last year, Longmire closed with season highs and yet didn’t get renewal news until late November. So… patience.

Rewinding to Sunday: Deadline reports that AMC’s Halt and Catch Fire closed its freshman run with its second-smallest audience ever, 574,000 total viewers, and down sharply from its premiere draw of 1.2 mil. (Time slot predecessor TURN earned a renewal with a finale audience of 1.6 mil.)

And just because you’re here, know that FX’s The Strain this Sunday did 2.3 mil and a 1.2 (per TVBTN), up two tenths week-to-week.