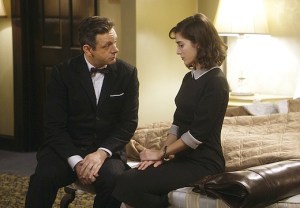 THE PERFORMANCE | Put up your dukes, Masters of Sex aficionados: In this week’s episode, Caplan and Sheen gave knockout performances.

Yvon Durelle and Archie Moore’s late 1950s boxing match fight framed an episode that found Bill and Virginia — via some tryst-time role-playing — revealing deep, hurtful secrets about their pasts. With the researchers holed up in their hotel room, the boxers’ historic bout unspooled in the background while Masters and Johnson expressed their feelings between the sheets (and up against the wall… and with their robes pooled around their feet…).

Sheen’s portrayal of his repressed character — a pressure-cooker of a man under normal circumstances — was a study in how to communicate the unsaid. It began at the hospital, when the birth of a child with ambiguous genitalia got Bill ruminating on the concept of manhood and his own troubled upbringing. Then, as he passionately conquered Virginia in the bathroom and later evaded her questions about his interest in boxing, Sheen showed just how much his alter ego likes (and is accustomed to) being in control. And when Virginia finally pried open Bill’s white-knuckled grip on his memories, Sheen’s account of his character’s childhood under an abusive father seethed with resentment. Bill was snide, curt, surly. Sheen was amazing.

Caplan was equally fascinating throughout the hour, particularly when Virginia’s airy take on role-play turned real as she told Bill about her first real love — and subsequent heartbreak. But the actress also sparkled as she teased him about his lack of imagination, bristled as she questioned his motives for skipping the sexual niceties and entranced as she showed him exactly how she was able to make herself “feel good.”

By the end of the episode, Durelle and Moore had duked it out, Virginia and Bill had reached new (if uncertain) ground and Caplan and Sheen had us basking in the afterglow. TVLiners, was it good for you, too?

RELATED Emmys 2014 Poll: Who Should Win Best Actress in a Drama Series? HONORABLE MENTION | Not to take anything away from Tara Reid’s resonant line deliveries, but it was Today weatherman Al Roker who brought the tiniest whiff of realism to Sharknado 2’s over-the-top fish tale. Playing straight man to anchor Matt Lauer (who struggled with the term “sharknado”), Roker worked his weather maps arduously, keeping viewers abreast of every twist with this set of twisters — to a point that his onslaught of convincing meteorological jargon nearly sold us on the possibility of EF 5 sharknados (let alone snow in July) actually happening. It’s reassuring to know that in the event of absurdly inclement weather, Al has us covered. HONORABLE MENTION | Smack dab in the middle of what has been a rather intense Season 3, Major Crimes lightened things up this week in great part due to West Bev grad Luke Perry’s turn as Johnny Worth, the star of a cop show whose overzealous stalker turned up dead. Whether sneaking a peek at his reflection in the glass while revering the badges of the LAPD’s “fallen,” willy nilly signing autographs (or away his Miranda rights) or obliviously taking pride in his photo’s placement on the murder board, Perry nailed the wink-wink casting of a TV heartthrob as a TV heartthrob. It was mere icing on the cake the way Johnny made lotsa the ladies (ADA Hobbs includes) swoon like teenage girls.