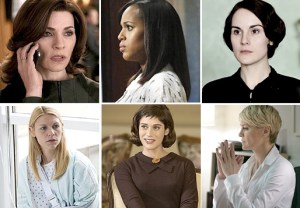 That old saying about “three’s a crowd” doesn’t apply to Emmy statuettes on your mantle. Which is exactly why Homeland‘s Claire Danes will be hoping to score her third consecutive win as Outstanding Lead Actress in a Drama Series at the 2014 ceremony.

Coming off the Showtime thriller’s uneven third season, though, Danes is hardly a lock. Among her competitors are 2011 champ Julianna Margulies (The Good Wife), who got left off the ballot in 2013 but roared back into contention this year with the CBS drama’s jaw-dropping, reinvented fifth season.

Meanwhile, Scandal‘s Kerry Washington and House of Cards‘ Robin Wright are back in the race for the second straight year for playing modern D.C. power players, while Downton Abbey‘s Michelle Dockery finds herself in the running for the third time in a row for her portrayal of a ’20s-era widow.

The only newcomer in the field is Masters of Sex‘s Lizzy Caplan, for her work as groundbreaking researcher Virginia Johnson. Caplan’s nod — and a reduction in nods from seven back to the usual six — leaves 2013 nominees Connie Britton (Nashville), Elisabeth Moss (Mad Men) and Vera Farmiga (Bates Motel) on the sidelines this time around.

What would you do if you had the power to honor one of these fine actresses when the Emmys are handed out on Aug. 25 ? Take our poll below to vote for your favorite, then hit the comments to justify your pick!