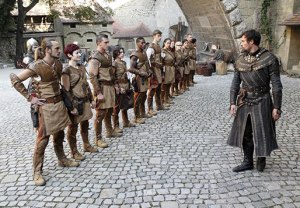 Everealm is holding out for a hero; he or she has got to be fast, has got to be strong and has got to… complete all the challenges on The Quest, a new reality competition show which premiered Thursday on ABC.

Fortunately, 12 potential heroes-in-training, or “Paladins,” have already crossed over to this mystical realm, making their way over hill and dale and the Marwood Forest to the kingdom of Saenctum, where they are immediately tasked with saving everyone from the evil Verlox.

But that’s not all that happened in Thursday’s premiere. Before you tell us what you thought about The Quest, let’s recap tonight’s events.

IN EVERY GENERATION | Jafar The Vizier — who seems very annoyed that he’s not Anthony Head — tells the Paladins the story of how the Fates gathered 12 heroes, testing them until they found the “One True Hero,” who went on to wield the sun spear and defeat the evil forces plaguing Everealm and sent Verlox (this realm’s Sauron) packing. Now each time Verlox returns, the Fates give 12 new Paladins the pieces of the spear, which our contestants now possess. CAPUT DRACONIS | The next moment is like a page out of Harry Potter, as Crio — the Paladins’ guide to this here crazy realm — shows them their living quarters in the castle: a common room, epic roundtable and all! Amidst the hubbub, Patrick (who is such a Hufflepuff) does the math and figures out that one of the guys will be rooming with a girl. (Surprise, it’s him!) His new roomie is Bonnie (also a total Hufflepuff), who Andrew says is like a sister to him.

CAMP FULLBLOOD | The next morning, the Paladins are awoken by the loud and grumpy Ansgar, the man responsible for training them. (Side note: Ansgar is totally channelling a passed-over-for-the-Defence-Against-the-Dark-Arts-position Snape.) They are led to their first challenge, which divides them into teams of three and has them shooting arrows at a field of straw dummies. The winning team is Ashley, Andrew and Bonnie, who are awarded the “mark of leadership.” The losing team of Katie, Patrick and Christian now face “banishment,” The Quest‘s version of an elimination.

CHANGING FATE |Later that night, Crio leads everyone to the Fates, which actually look as magical as everyone says. Katie, Patrick and Christian are forced to complete one last “Fates Challenge” to save themselves. The task one involves archery, so Christian lets his inner Katniss rip and avoids going home. That leaves Patrick and Katie to be “judged” by their fellow Paladins.

Here, the discussion takes an interesting turn as the contestants discuss who would be able to help the “One True Hero” in the long run and might be worth keeping. It also becomes clear that Christian (the resident Slytherin) believes he’s already won the whole competition. When their time is up, the Paladins literally stand behind the person they want to stay. So just like that, the tribe speaks and Katie is banished, handing over her piece of the sun spear before vanishing into… smoke?

The Quest is every bit of fun you’d want from a summer reality competition series, especially one that incorporates narrative storytelling around each challenge. The great special effects bring to life the more mystical elements and help sell the wonder the contestants are expressing. More than that, having to save the kingdom reduces the personal drama between the contestants and the fact that they can see who everyone is voting for should keep things interesting. Also, there’s probably going to be a dragon at some point. I’ll definitely return to Everealm next week.

That’s what we think, but what’s your take? Grade The Quest via the poll below, then hit the comments to back up your choice.