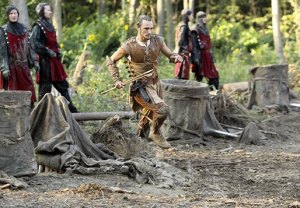 Sometimes fairytales do come true — at least they will this Thursday, when The Quest, ABC’s latest reality competition series, premieres at 8/7c.

Set in the imaginary world of Everealm, the show features 12 contestants — known as “Paladins” — who must compete against each other and complete challenges in order to save the kingdom of Saenctum from the evil forces that besiege it.

Those who fail the episode’s challenges are “banished,” while the eventual winner receives the title of “One True Hero.” were surprised at how closely the rules of fantasy universes match the format of most reality shows.

“With fantasy, you start with a group of people and one by one, after circumstance and adventures, they’re eliminated,” Fleming says. “So there’s one hero. Both genres follow the hero’s journey.”

At the end of each episode, the contestants discuss who’ll be banished, then cast their votes by backing either of the two Paladins up for elimination. “Everybody has to stand behind their decisions, so it creates a gravitas to decision-making when you know that the person [you’re eliminating] and your friends are going to see how you voted,” Fleming explains. “That was deliberate on our behalf because we feel that it’s all part of leadership.”

But enough about game play; don’t you want to hear about the ogres? The series is set in an extensive fantasy world that’s enhanced by filming in a real Austrian castle. Special effects make-up and animatronics create the creatures (including dragons and, yep, ogres) that inhabit the mystical realm. Special effects artist Mike Elizalde (Hellboy, Jumanji) oversaw the unique, fantastical zoo. “We wanted our own creatures, so he designed all the creatures for us,” says EP Rob Eric (Queer Eye).

No matter how gnarly the mystical beasts, Fleming points out that within Quest‘s world, the Paladins are prophesied heroes. However, “As in any prophecy, how it’s going to unwind  is a mystery to both the scripted characters as well as the contestants.”

Will you be going on The Quest? Drop a comment with your early thoughts below.