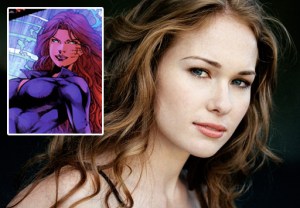 The Flash doesn’t premiere until Oct. 7, but things are already heating up in Central City.

RELATED The Flash Welcomes Wentworth Miller as [Spoiler] — Plus: More Scoop on Robbie Amell and Firestorm

Kelly Frye (Rake) will guest-star as Bette San Souci, a bomb disposal expert destined to become the villainous Plastique, E! Online reports. A nasty enemy with the ability to turn any object into an explosive device, Plastique will make her first appearance in Episode 5.

* Shawn Doyle (Fargo) has been tapped to recur on USA’s Covert Affairs as Georgian diplomat Aleksandre Balenko. Though he appears trustworthy on the surface, Piper Perabo’s Annie will quickly become suspicious of his true motivations.

* TV Land has ordered 10 episodes of The Gaffigan Show, a sitcom starring Jim Gaffigan (My Boys), Michael Ian Black (Burning Live) and Adam Goldberg (Fargo). Comedy Central will re-air each episode within a week of its premiere on TV Land. The series, originally filmed (twice) as a pilot for CBS, is slated for a 2015 debut.

* FXX’s fantasy football-themed comedy The League will return for its 13-episode sixth season on Sept. 3 at 10/9c, followed by the premiere of Ali G Rezurection at 10:30 pm.

* Tony Award-winning actress Donna Murphy (Made in Jersey) will recur on the second season of ABC’s Resurrection, according to The Hollywood Reporter. Murphy will play a government agent sent to monitor Omar Epps’ Agent Bellamy.

* The CW is paying tribute to man’s best friend in January with a new two-hour special titled The World Dog Awards. The event will honor dogs “for their work in entertainment, health services and the military, along with everyday dogs who found fame on the internet.”