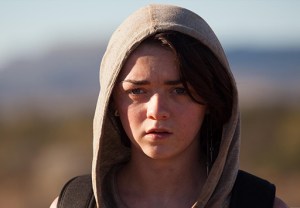 As Game of Thrones‘ feisty swordstress Arya Stark, Maisie Williams isn’t typically seen as a damsel in distress — nor should she be — but following the stateside release of her new movie Heatstroke, that’s all about to change.

In Heatstroke — originally released in the UK in 2013, but now available in the U.S. on iTunes and VOD — Williams plays Josie, the daughter of Stephen Dorff’s Paul, who finds herself in desperate need of saving after a family trip to Africa goes horribly, violently wrong.

Below, Williams talks to TVLine about the struggles of playing helpless in Heatstroke, why she loved Thrones‘ Lady Stoneheart exclusion and why she believes Arya is finally “ready to go off on her own” in Season 5. TVLINE | What attracted you to this role? Josie is sort of the anti-Arya.
I shot this two or three years ago, and when we got the script, I wasn’t in any position to be picking and choosing roles to play. I think people think stuff gets thrown at us all the time, but that’s not the case; there aren’t many roles out there for people my age.

TVLINE | Did you enjoy not having to be the fighter for once?
[Josie and Arya] are both completely different characters, and I enjoy doing both. I enjoy Game of Thrones for obvious reasons, but it was also refreshing to work with a different crew on a different set with different cast members.

TVLINE | Do you have a favorite scene in Heatstroke?
When Jo encounters the hyena, that was pretty cool. It was really different, something you don’t get to experience on every film set.

TVLINE | I feel like you work with a lot of animals. Any favorites?
The horses are the easiest, they don’t get too grumpy. The dogs would probably be second. The hyenas were also good, but there’s always the possibility that they’re going to freak out, because they can’t really be tamed. … Oh, the cat I worked with on Game of Thrones was so badly behaved! It would never do anything it was supposed to do. I was like, “Get your game together, cat. You’re so bad.” TVLINE | Well, hopefully Arya won’t be dealing with any more cats in Season 5. Do you know what she will be dealing with?
I haven’t gotten the scripts yet, so I still don’t know what’s happening. I have a rough outline of what happens in the books, but you never know what they’re going to put into this season versus next season, or what they’re going to scrap altogether. I know a couple of really cool things happen in the books with Arya, and I just had a meeting about about a certain thing that happens to Arya, but I still don’t know how it happens. And that’s what it was like last year; I was learning fight scenes, even though I didn’t know who I’d be fighting or why I’d be fighting them. People think the cast members know all the ins and outs, but we really don’t.

TVLINE | Being a social media pro, I’m sure you’re aware of the Lady Stoneheart outcry. Any thoughts on that?
That was a massive deal, but honestly, I really like it. I’m so sick of going on the internet and seeing all the book readers being snobby, spoiling it for other people, then saying, “Well, it’s not a spoiler. The books have been out for years.” Like, couldn’t you just stop being mad for a second and let other people enjoy the show? They feel they have a claim on the series because they read the books first, and I understand that, but they don’t need to be mean about it. That’s why I liked moments like this, because book readers think they know what’s coming, then we change it and it’s really funny to watch their reactions. They’re always like, “That’s not what happened in the books, so the show’s really bad now.” But really, they just feel insecure because they’re used to knowing what’s coming next.

TVLINE | Do you know what’s coming next, at least for Arya?
I don’t know, honestly. We’re starting to catch up with what’s been written, so I’d love to do something completely new. Again, I’d love to keep making the book readers go, “Wait, is that what’s going to come in the next book? Did they make that up completely?” I love it when we do something really dramatic and shock everyone. They should throw in more stuff that no one knows about.

TVLINE | As long as it’s not Arya accidentally falling out of a moon door.
[Laughs] Yeah, that would suck. Thrones fans, what are you hoping to see in Season 5? And for all you book snobs, how did you feel about the lack of Lady Stoneheart in Season 4? Drop a comment with your thoughts below.