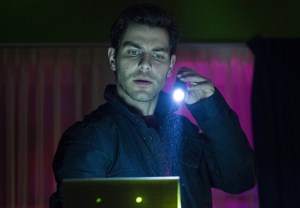 Fresh off a chaotic finale wedding, the cast and executive producers of NBC’s Grimm spoke with fans Saturday at San Diego Comic-Con to clear the air about the drama to come in Season 4.

Following a never-before-seen “home video” from Monroe and Rosalee’s wedding — featuring a hilariously drunk, and still not engaged, Juliette — the Grimm team came out to roaring applause. (And yes, Sasha Roiz was among the group, dressed appropriately in “resurrection white.”)

“We try to make a honeymoon, but things are complicated in Portland these days,” lamented Silas Weir Mitchell, though Bree Turner suggested that Monroe and Rosalee probably “had a quickie in the VW” after the wedding. So at least their marriage has been consummated.

As for now-powerless Nick, David Giuntoli said that Trubel is basically forced to become his “seeing-eye Grimm” in Season 4, though he “hopes” Nick eventually gets his abilities back.

Of course, Nick’s lack of powers isn’t his only obstacle in the coming season. Following her on-screen boyfriend’s inadvertent affair with Adalind, Bitsie Tulloch teased that “it remains to be seen whether [Juliette] going to forgive him.”

Speaking of past affairs, the Captain will be back in Season 4, though it’s unclear as to how he’ll survive what happened to him at the end of Season 3. (Roiz said the team will find an “interesting” way to save Sean.)

And then there’s Wu, who might have some “shirted rage coming this season,” according to Reggie Lee, who added that his character is “on the verge” of putting all the pieces together.

We’ll obviously be seeing new wesen, beginning with an octopus creature that steals people’s memories. (Sounds kind of cute, right?) But one thing you shouldn’t look forward to in Season 4 is a resolution of the series’ seemingly never-ending key saga. Executive producer David Greenwalt said that although a new key will be introduced, we won’t know what “those damn things” actually mean until “year five.”

(But come on, are you really surprised?)