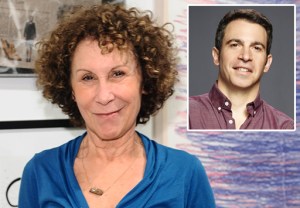 Three Cheers for this casting.

“The wonderful thing about the character is the trope of the mother-in-law-type figure who doesn’t like the girl is so pervasive, it’s like, ‘OK, how do we do a new spin on this?'” she told reporters, adding that Mama C will clash with Mindy and Danny. “As Danny has said, ‘I don’t know how to please that woman.’ So we haven’t ignored her own relationship with her two sons [Danny and Richie, the latter played by the returning Max Minghella] and her ex-husband [played by Dan Hedaya]. So we really explore a lot.

“The third episode is called ‘Annette Castellano Is My Nemesis,'” she added. “[so] we really hit it dead-on.”

Perlman’s recent credits include a guest stint on The Neighbors and a regular gig on the short-lived TV Land sitcom Kirstie.