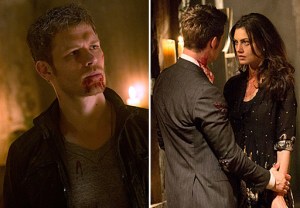 With exactly 11 weeks until the second season premiere of The Originals, TVLine caught up with executive producers Julie Plec and Michael Narducci for the scoop on what the Big Easy has in store for our (anti)heroes.

RELATED Nathaniel Buzolic Returning to The Originals In Season 2: Find Out How!

In addition to being the title of the premiere, the EPs told us “Rebirth” will be a running theme of the CW drama’s sophomore season. Part of that will come from Klaus and Elijah confronting their parents — and, spoiler alert, Narducci told us “it’s not going to be a huge amount of time” before they figure out Mikael and Esther are back with a vengeance.

HAYLIJAH | Unfortunately, it sounds like Hayley and Elijah’s relationship will be taking a step back in Season 2. “[Hayley] and Klaus are the only two hybrids in existence now, so Elijah will inevitably wonder, ‘Is there a connection between my brother and Hayley that I could never surpass?'” Narducci explained. “There’s going to be some interesting friction. Ultimately, Elijah is going to have to decide, ‘Do I want to help this girl?'”

KLAUS: THE EARLY YEARS | Season 2, Narducci explained, is “all about confronting the sins of the past. We’re very much defined by our parents, but as we become adults, we begin to choose our own paths. … Klaus is very much a product of his abusive father, and very much a product of his mother.” In going deeper into Klaus’ moral origins, we’ll see “flashbacks to when he was a child,” as well as “right before he became a vampire.” All of this will “examine what his relationship was with his mother, and the sense of betrayal that he felt when she came back from the dead and judged him as an abomination.” A WITCH’S CONFLICT | Davina’s agenda, Narducci explained, is going to unfold in an interesting way this fall: “She has Mikael under her control, and she wants Klaus to suffer — but she also loves Josh and Marcel, and she knows they’re connected to Klaus. She’s going to have to be smart about what she ultimately decides to do with Mikael.” As for which of Klaus and Elijah’s brothers Esther brought back with her, the EPs are remaining tight-lipped for now.

WHAT’S IN A NAME? | The explanation behind the season premiere’s title, “Rebirth,” is two-fold, according to Plec. Not only is it indicative of the episode’s theme — the loss of Klaus’ baby, the start of his new life, etc. — but it also has a special meaning for the show, itself. “Every title we use, we try to make it a song title from New Orleans or an artist from New Orleans,” Plec said. “Rebirth is one of the best brass bands in New Orleans, and they were in our pilot. We’ve been waiting to use that title for 22 episodes.”

The Originals‘ second season premieres Oct. 6 at 8/7c on The CW.

Originals fans, what are you hoping to see in Season 2? Drop a comment with your thoughts on Plec and Narducci’s latest teases below.