Well, folks, it’s all come down to this. The fates of the Mikaelsons, their city and their newborn heir all hang in the balance during tonight’s season finale of The Originals (The CW, 8/7c) — and not to stress you out, but Daniel Gillies promises a “tragic” conclusion.

Below, Gillies reflects on Elijah’s recent suffering — including the “complication” of his relationship with Hayley — and teases the “heartbreaking” finale that will propel us into Season 2.

TVLINE | I can’t believe we’re already at the end of Season 1. How did this happen?
Someone described the experience of the first year with a child as the longest shortest year of your life, and in a weird way, that’s how I feel about The Originals in its first year. It’s been the longest shortest year of my life. It still feels like yesterday that we set out on this journey, but if I really look back at it, there’s such a dense archive of memories and experiences. It’s been amazing.

TVLINE | And you’re already cranking out the first three episodes of Season 2. Do you ever sleep?
Structurally, it just made sense to continue on with the second season, given where everybody’s schedules were at and when everybody was working. We were all of the mind that, “Look, the engine’s already firing on all four cylinders and we’re all here, so let’s just get this done.” People still get their hiatus, but it’s nice to continue going without having to do a reset. There’s something awkward about coming back for a new season. That first episode is just a little clunky; you’re not quite at ease.

TVLINE | Speaking of not being at ease, Elijah’s taken a beating these past few weeks.
[Executive producer] Julie Plec definitely has some kind of vendetta against me. She’s very upset with me for some reason and has taken to beating the hell out of me through narrative. I love all of this stuff, but we certainly look a little worse for wear these days. Thank God we have those regenerative powers, otherwise we’d look like Keith Richards and Mick Jagger. TVLINE | Elijah’s suits seem to have that regenerative power. He always looks great.
It’s funny, there are certain choices I like to make with Elijah because I feel there really is an amusing aesthetic you can keep with him. Like, I enjoy having him tear someone off a motorcycle that explodes with half of a ton of plastic — and he’s not unscathed, but his hair is relatively in place and his pocket handkerchief is immaculately placed.

TVLINE | I’m sure Hayley appreciates that. Can you preview the future of that relationship?
They’re sort of doomed, and I almost wonder if that’s what makes those two special. And the more she grows, the more humorous it becomes. We had to be really careful with some of those kisses. In trying to seize her in a passionate embrace, I had to make sure I wasn’t being comedic in terms of slamming into a nine month-old belly. We had to exercise due caution with the rampant sexual advances. … I love their chemistry and the complication of the relationship. You’ve got a 1,000-year-old vampire and a pregnant werewolf girl. It couldn’t get any more unique than that. And not only a pregnant werewolf, but a girl pregnant with his vampire brother’s child.

TVLINE | Joseph Morgan recently told us Elijah would make a better father than Klaus. What will Elijah’s relationship be like with Hayley’s child?
That’s difficult to say. He’s someone who’s a real executor of propriety. He values code almost above anything else. People often confuse it with morality or nobility, but it’s a code he adheres to. Because of that code, there’s a restrictive quality. If the child was born, he’d be the most supportive extended family member there could be, but … I think he wants Klaus to be a father and to step up to the plate, almost more than anyone else in that universe. His primary concern is making certain Klaus is honorable towards fatherhood. In a microcosmic way, the child was representative of this new kingdom. He just wants him to take the throne with a degree of dignity, and that means taking fatherhood with that same dignity.

TVLINE | And what does the finale have in store for us? How are you ending the season?
It’s a heartbreaking episode. I haven’t seen the finale itself, but I really felt like what we were doing was something sweet and heartfelt and tragic. But that’s all I can really say. Matt Hastings, our director, is unbelievable. He’s one of our greatest directors, and we were honored and blessed to have him direct the finale. It’s a special way to leave the season.

Browse photos from the season finale below, then drop a comment: How should Season 1 end? 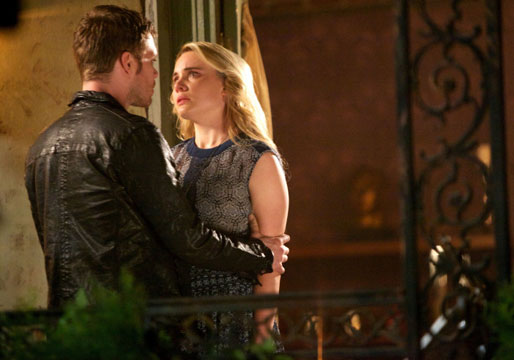