The battle for New Orleans finally begins tonight on The Originals (The CW, 8/7c) — but with an endangered baby on the way and a vengeful father crawling back from the Other Side, Joseph Morgan tells TVLine that Klaus’ attention is pretty divided at the moment.

Below, Morgan previews the final twists of Season 1, including Klaus’ reaction to Hayley and Elijah’s kiss, as well as Klaus’ own “huge” moment at the end of next week’s finale.

TVLINE | Elijah and Hayley finally kissed last week. I imagine Klaus won’t be thrilled.
I don’t think it’s going to go down too well. Klaus is very possessive over his siblings, and he wants to be the center of attention. That comes from his childhood, from being the outcast of his family. He tries to force his siblings’ affection and love, and someone else being the subject of that won’t sit well with him. Also, the fact that it’s Hayley and she’s carrying his child will be really difficult for him to get his head around. The truth is, they’d probably be better without Klaus. In a time of peace, when they could make a go of it as a family, Elijah would make a good father.

TVLINE | Speaking of good fathers, is Mikael really coming back?
He’s only back in dreams and visions at the moment, but I’d say that’s still pretty terrible news. He’s the monster who monsters were afraid of, to quote Klaus. He wants nothing more than to put his bastard son to rest once and for all. I always felt like, when Klaus staked Mikael on The Vampire Diaries, it was almost too easy. I felt like, “That guy’s coming back at some point.” He’s a threat to be reckoned with, and now he’s trying to break through to life — or, to unlife, him being a vampire and all. It’s a terrifying prospect.

TVLINE | I love that the Other Side’s collapse on TVD is also being felt on The Originals. It’s like a mini-crossover.
It is like a mini-crossover, and it’s a wonderful opportunity to say, “After this point, we can’t just bring anyone back anytime we like.” The stakes are higher. What it also says is there’s a very small window where anyone who we’ve seen could potentially come back. Until the Other Side is gone, there’s a chance for anyone. TVLINE | Let’s talk about that window. Who would you like to bring back?
It would be nice to bring Aunt Jenna back. I feel kind of bad about that one. Consider this my public apology to Aunt Jenna. I know it was bloody years ago, but I still feel terrible. It wasn’t a great way to come into Mystic Falls. I didn’t make many friends, initially, having done that. So, yeah, sorry about that one.

TVLINE | Hayley’s due date is fast approaching. Will we see a baby this season?
You know, I hope so. It’s the one thing that’s kept Klaus’ humanity. He’s slowly coming around to the idea of this baby, and if that baby isn’t born — or is killed after it’s born, or is taken from him — that will send him down a very dark path. And he’s made so much progress this season, it would be a shame.

TVLINE | I understand Klaus makes a “heartbreaking decision” in the finale. Can you elaborate?
Well, it’s very heartbreaking, it’s a decision and he has to make it. That’s all I can say about it.

TVLINE | I get the feeling you’ve already been asked about that.
[Laughs] I have. Surprisingly, I have. I’ll tell you this: It’s the last scene I have in the entire season, and it was very emotional for me to play. It was also very necessary for the character.

TVLINE | Will that be the finale’s cliffhanger?
First of all, the last two episodes are absolutely action-packed and emotionally-charged. They’re huge episodes, and my last scene is going to be big, emotional, huge. It’s everything coming together. And then you’re going to see another scene, and that one’s going to make you go, “Oh, I want to watch Season 2 right now!” That’s about the sum of it.

Browse photos from this week’s episode below, then drop a comment: What are your hopes for the end of the season? 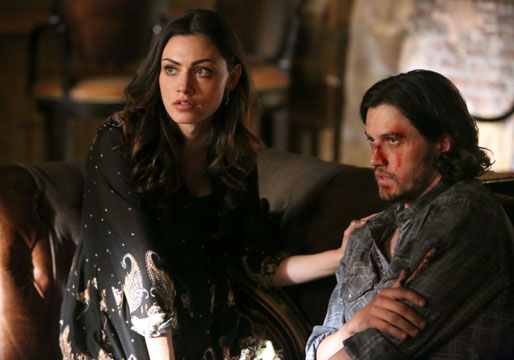