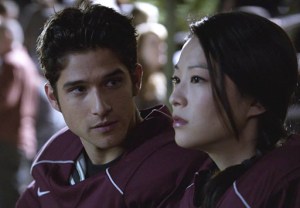 Monday’s Teen Wolf transformed Beacon Hills High School’s lacrosse field into a battlefield, and all eyes were on that smug, Mormon-looking murderer Garrett. To make things even more stressful, it was Kira’s first game and the opposing team was from Liam’s old school! (This is why I don’t do sports.)

After Garrett stabbed Liam’s rival Brett — who also happens to be supernatural — with a poisoned dagger, the fight moved to the locker room, as always, where Scott discovered Violet’s involvement in the recent string of murders. Well, he at least discovered her involvement in this attempted murder, which prompted him to knock her out cold. (Or did he kill her? Either way, anyone could have walked into that locker room and discovered two unconscious teenagers. So once again, Scott and Stiles have somehow managed to avoid going to prison, where neither of them would last a week.) TICK… TICK… | Before the big game, we learned a little more about Liam (who is literally 16, might I remind you. So if you were born before 1996, please keep your thirsty tweets to yourself.) Anyway, Liam was apparently kicked out of his prep school for going b-a-n-a-n-a-s on his old coach’s car, for which he was basically diagnosed as a human time bomb — because, of course, Scott had to go and bite a kid with behavioral problems. Despite Liam’s penchant for exploding, though, Scott is actually exhibiting some very paternal instincts with his progeny. They’ll totally win the three-legged race at the next father-wolf/son-wolf picnic. (Those exist.)

BROKEN RECORD | With a third of the dead pool cracked via the cipher code “Allison,” Lydia is now devoting all of her free time — and apparently all of her school time — to cracking the other two. And when trusty techniques like listening to records and scribbling on paper proved futile, she turned to Plan C: Meredith. (You remember Meredith, right? That curly-topped goober we met so briefly last season, then never heard from again? Well, she’s back!) Mer-bear showed up at the police station, specifically to give Lydia another cryptic cipher code: “Aiden!” (Clearly, the Benefactor is still carrying a ton of emotions from Season 3B.) But wait — the bigger surprise was seeing Deputy Parrish’s name on the dead pool! Could he be a werewolf, too? Another banshee, perhaps? Given that sweet li’l face and baby-smooth skin, I also wouldn’t eliminate angel from the realm of possibilities. (Update: Commenter Patrick Maloney is theorizing that Parrish could be the Benefactor, and merely put his own name on the list to throw us off. I like it!)

POWER FAILURE | Meanwhile, Derek and Papa Argent — who make a phenomenally bearded little team — continued their hunt for the Benefactor, a quest which led to a most-unfortunate revelation: Furry McHale is losing his powers!

It also led to a most-unfortunate encounter with Araya, who made good on her promise to visit Beacon Hills following Scott’s first bite. After inquiring about Braeden’s whereabouts, she laid the guilt on real thick, reminding Argent that he swore to live by the hunter’s code (“We hunt those who hunt us!”) and will eventually need to turn on his supernatural pals. Despite the encounter giving me creepy Animal Farm flashbacks (“Four feet good, two feet bad!”), it set up an interesting conflict for Allison’s dad — as if he wasn’t conflicted enough already.

* Malia got her hair did between Episodes 4 and 5, and she looks great. (With those locks, who even needs math?)

* Whenever I see a scene between Kira and her dad, I’m shocked there isn’t a laugh track.

* How long do we think it’ll take Mason to start putting the pieces together? Or is he already? If there’s one thing I learned from Danny, it’s that gay best friends know everything on this show. (And then they disappear.)

OK, Teen Wolf fans, time to weigh in: Will Argent actually side with Araya? What kind of supernatural creature is Parrish? And why hasn’t Malia given her hairdresser’s phone number to Meredith? (Seriously.) Drop a comment with your thoughts on this week’s episode below.