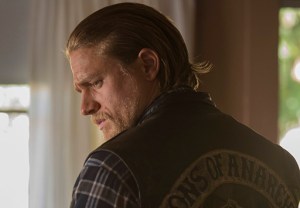 FX’s Sons of Anarchy rides into its final 13-episode season this September, and while creator Kurt Sutter is confident in his planned ending, he admitted Monday that the journey is still uncertain.

“I’m a week and a half behind on Episode 7,” Sutter joked — or perhaps not — during the Television Critics Association summer press tour in Beverly Hills. “I came in with how I wanted this season to end, which will be the end of the series, and we’re heading in that direction. But things change with different story ideas; it’s always been heading in the same direction, but the way I’m getting there continuously changes.”

Season 7 picks up 10 days after Tara’s brutal murder — at the hands, and carving fork, of Gemma — and Hunnam said Jax is in an appropriately “schizophrenic state.”

“He’s obviously very sad and vulnerable and kind of broken, but there’s a huge amount of vengeance and anger in his heart,” Hunnam said. “The way all of that is processing, at least in the very beginning, is [starting] to have a numbing effect. He knows what he wants to do, and that’s where all of his energy is going to go, but he can’t get away from the fact that the love of his life has been taken from him.”

Before the panel, reporters were treated to a sneak-peek scene from the season premiere, in which Jax tells Gemma how much he loves her; the dramatic irony between them is thick and palpable. “She’s somewhat duplicitous,” Katey Sagal admitted, before correcting herself. “It’s not even somewhat. What’s coming out of her mouth and what’s going on in her head are two different things. She’s made adjustments to the situation based on her basic instinct, which is to survive and keep her family together. She is still all about that.”

As Jax remains unaware of his mother’s betrayal, Hunnam said his relationship with Gemma is “similar, if not better than ever” in Season 7.

“This final betrayal [has] completely demolished any potential of him trusting anyone outside of his immediate circle,” Hunnam explained. “In all of the scenes, I’ve been trying to instill a little of that sense. Unless you’re my mom, my children or one of the Sons, you’d better watch out.”

That said, Season 7 isn’t all gloom and doom. There’s a “very exciting romance” on the horizon, at least according to Hunnam, who excitedly announced, “Tig’s getting some this year!” As for the additions of Marilyn Manson and Courtney Love to Season 7, Sutter said both actors are part of the “outside-of-the-box” casting he likes to do every year. (See Stephen King and David Hasselhoff.)

“Manson I became friends with through some music buddies, and he’s a huge fan of the show,” Sutter said. “That was him basically wearing me down, and we found a great role for him. Courtney I don’t know that well. I got to meet her a couple times — I was a huge Nirvana fan — and I know she’d experessed interest on wanting to work on the show. Then we had this role of a school teacher, and I thought, ‘Who better than Courtney Love?'”

Following yet another major Emmys snub — neither the show nor any of its stars nabbed nominations this year — the panel was asked for its honest reaction.

Though Sutter declined to make a big speech (“I’ve diatribed on that many times,” he noted), the same can’t be said for leading-man Hunnam.

“It doesn’t matter at all,” he said of the show’s lack of Emmy nominations. “There’s this perception as though we’re kind of upset about this. I can only speak for myself … I really don’t give a s—t. I make this for the people who watch the show. … If people don’t appreciate it, you can’t win ‘em all.”

Sons fans, what are you hoping to see in the final season? And how do you feel about the show’s latest Emmy snub(s)? Drop a comment with your thoughts below.