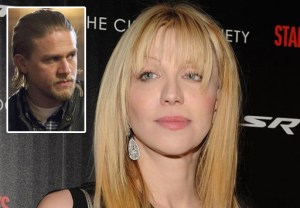 Sons of Anarchy‘s final season promises to be one big Love-fest!

The FX drama has tapped rocker Courtney Love to join Season 7 in a pivotal, multi-episode arc, TVLine has learned exclusively.

Love, who put the brakes on her acting career of late, won raves (and a Golden Globe nod) for her supporting work in 1996’s The People vs. Larry Flynt. Roles in the Andy Kaufman biopic Man on the Moon and the Kiefer Sutherland drama Beat followed.

This is hardly the first time SOA has gone to the music well to cast key parts. Dave Navarro recurred as a gang member in Seasons 5 and 6. And Marilyn Manson is set to appear in Season 7 as a prison power player who has dealings with Jax.

SOA Season 7 bows this fall. Love will debut in Episode 4.