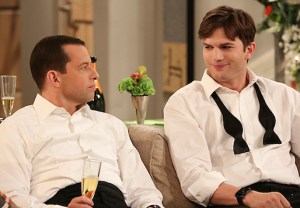 CBS’ Two and a Half Men is poised to say “I do” before it says adieu.

In its farewell run (premiering Oct. 30), the long-running sitcom will find Walden (played by Ashton Kutcher) proposing marriage to Alan (Jon Cryer) — if not in the name of love, for a greater good.

“Walden is going to have a major health scare and it is going to give him a bit of an existential crisis,” CBS Entertainment chairman Nina Tassler told reporters Thursday at the Television Critics Assoc. summer press tour. “He wants to find a way to add more meaning to his life, so he decides he wants to adopt a child. And in doing so, he starts the process and he realizes that it’s very difficult to adopt a child as a single, straight man.”

Cue the popping of a Q! “So once and for all, he decides, ‘I’m going to propose to Alan,'” Tassler shared. “‘We’re going to get married and adopt a child as a gay couple.'”

Is Tassler concerned at all that GLAAD or the LGBT community at large might cast aspersion on the sitcom playing (a fake) gay marriage for laughs? “I think it’s a very positive statement,” the network boss counters. “[Walden believes he is] going to adopt a child as a gay couple, and the reality is he can do that. In a universe where at one point you couldn’t do that, and now you can, I think that’s a much more positive statement that he’s making.” (With reporting by Vlada Gelman)