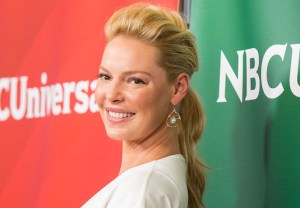 Katherine Heigl says it never has been — nor is it — her intention to be a difficult actress to work with, despite years’ worth of rumors that have dogged her since she famously parted ways with Grey’s Anatomy.

Asked to account for if not defend her reputation, Heigl said Sunday at the Television Critics Assoc. summer press tour, “I certainly don’t see myself as being difficult. I would never intend to be difficult…. I think it’s important for everyone to conduct themselves professionally and kindly. If I ever disappointed somebody, it was never intentional.”

Heigl was appearing at TCA to promote State of Affairs, NBC’s new D.C.-set drama in which she stars as a CIA analyst with close professional/personal ties to the President of the United States (played by Alfre Woodard). Heigl said she finds it “really compelling” to portray an “intelligent woman” and “real patriot” who, by crafting and delivering the daily briefing to POTUS, helps the leader of the free world do her job.

Fretting that she had ceased flexing certain acting muscles during her run of big-screen rom-coms, State of Affairs, she said, presents “an extraordinary role and an extraordinary story, and it’s an opportunity for me to … show different sides of myself as an actor, performer and storyteller.”

Recapping her previous headline-making as a TV star: As a Grey’s cast member, Heigl decided in June 2008 to remove her name from Emmy consideration because she did not feel she was “given the material to warrant a nomination.” (She ultimately offered a mea culpa for that, telling Michael Ausiello, “I ambushed [the writers], and it wasn’t very nice or fair.”) A year-and-a-half after said outburst, the actress’ Grey’s run abruptly ended after she allegedly pulled a no-show at the set, prompting her and Shonda Rhimes to agree on an early contract release.

Heigl then segued into movies. Following the aforementioned run of romantic comedies and leading up to her return to TV via State of Affairs, Heigl explained, “I took a couple of years to be with my family, my new daughter… I needed that time, to be a mom, to be a wife… and really revel in that, and remember what it is I feel so passionate about in this industry.”

In 2012, Heigl floated the possibility of returning to Grey’s as Izzie. “If they want me to return for an arc, I would love to know where Izzie is now,” she told TVLine. “It’s been a couple of years. I really hope she’s succeeding somewhere.”