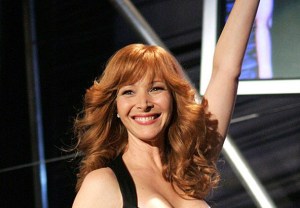 Some things never change, and that’s good news for fans of cult-favorite comedy The Comeback, which returns for Season 2 on HBO this fall.

“The show is the same as it was nine years ago,” co-creator/star Lisa Kudrow said Thursday at the Television Critics Assoc. summer press tour in Beverly Hills.

“The DNA that we liked about Valerie is her in front of a camera unedited,” added co-creater Michael Patrick King. However, “this time we found a different way to get her in front of the camera because we wanted to evolve the character.”

To that end, this round of episodes will find Valerie being followed by a behind-the-scenes crew after she gets cast on an HBO dramedy. Fret not, newbies, a “crack cocaine opening” will catch viewers up on what the actress has been up to in the past nine years.

“What I like about where we start this [season] is she thinks she’s spiritually evolved,” King described. “She’s sort of figured out what’s happened to her.”

She’s not the only one who’s grown: Original cast members Malin Akerman and Kellan Lutz – who’ve since become more famous in real life – will be back as meta versions of themselves, aka bigger stars. Also returning is Lance Barber’s Paulie G., who plays a big role in Season 2 as Valerie’s nemesis.

“[We] got to bring back all the characters we thought were essential,” King assured the crowd.

So will there be even more Comebacks if the upcoming run is successful?

“This [season] has a beginning, middle and an end,” King noted. “If we’re lucky, maybe you’ll see her again. This felt like a very full experience.”