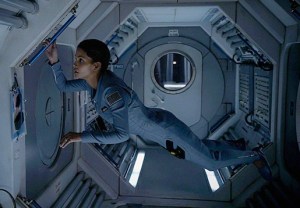 In CBS’ 13-episode summer drama Extant, Halle Berry is Molly Woods, an astronaut facing a very freaky final frontier. And based on the Lost­-like vibe of the series premiere, it’s likely you’ll want to tear open a foil pack of freeze-dried ice cream and strap in for the ride.

In addition to serving up some serious heebie-jeebies and bringing Goran Visnjic back to my TV screen (side note: thank youuuu), the Steven Spielberg-produced thriller poses some big questions in its first outing. Among them: If a machine can fake love with precision and aplomb, does it really matter if the emotion isn’t real? How much do we really know about what’s floating around in the gaping void just beyond our atmosphere? And how in the name of all that is good and holy is it fair that Berry looks better while tossing her cookies than I do on my best day?

We’ll consider all of these points as we review the premiere, “Re-entry” — and then, we want to know what you thought of the new series.

RELATED  Save the Date: More Than 50 July Premieres and Finales

HARD RETURN | The hour opens with a boy flying a toy spaceship around his room but stopping when he hears his mom throwing up in the bathroom. The woman is the aforementioned Molly, who sports a gnarly saliva thread hanging from her chin as she reassures the boy that her body’s “just readjusting.”

She recovers in time to attend a party in her honor later that day: After being away on a solo space mission for the past 13 months, the astronaut has returned to normal life with her husband John (Visnjic) and son Ethan (Pierce Gagnon, One Tree Hill). It’s all very normal and futuristic in the “in five or 10 years from now” way rather than in the “tea, Earl Grey, hot” way; I, for one, am psyched if my future will include such luxurious knitwear as John and Molly sport throughout this episode.

But we soon get the sense that not everything is as normal as it first appears. When Molly takes out the trash later that evening, a shadowy figure appears on the street nearby, then disappears. Meanwhile, upstairs in Ethan’s bedroom, we learn that John and Molly’s son may look like a real (if creepy) boy, but he’s actually a robot – pardon me, a “humanich” prototype created by John, who hopes to get the funding to build many more.

Even weirder: When Molls visits with her doctor pal Sam, she gets some insane news – she’s pregnant. But I’m infertile! And I’ve been in isolation for the past year!, Molly protests. Still, the space-age EPT doesn’t lie, and the gobsmacked mom-to-be begs Sam not to say anything to anyone just yet.

SPACE ODDITY | Flashback time! Throughout the episode, we see Molly in action during her mission. The footage looks very cool, Molly’s jumpsuit looks very tight, and all seems to go according to plan until the computer craps out, the lights dim and OH MY GOD THERE’S A MAN ON THE STATION WITH HER. The low hum of the machinery, the camera work, the weird-acting, possibly alien embodiment of Molly’s probably-dead former lover/husband Marcus… if you wanted to fill me with dread and fear, Extant, mission accomplished.

As Marcus parrots Molly’s words — despite what he says, it is decidedly not OK – she starts to cry and then blacks out. When she comes to, it’s about 13 hours later and the computer is back online… and security footage shows her reacting to absolutely nothing: Marcus, or whoever he was, didn’t show up on film. Freaking, Molly deletes the footage and later tells her superiors it was an accident made during a routine system back-up, something they secretly doubt.

SOFT(WARE) SELL | John – flanked by his colleague Julie (Grace Gummer, The Newsroom) and Ethan – goes before the board of a big-deal corporation to ask it to back his project. What about a robot uprising? one of the board members queries, but John pooh-poohs the concern by stressing how his humanichs are raised as humans and therefore pose no threat. (And somewhere, Bill Adama grinds his palms into his face in frustration and asks, “Seriously?” So say we all, dude.) Another board member angers John with her questions about kill switches if the androids get out of control, and when he shoots back, “Do you have a child? Do you have a plan to kill her?,” the meeting’s over.

Things look up when Hideki Yasumoto, the head of the company, invites John to his home and offers to privately finance the venture. Two things John doesn’t know: Yasumoto is in league with Molly’s suspicious superiors, and Yasumoto was (until very recently) encased in goo and possibly kept in a state of stasis or something equally weird.

I SCREAM, YOU SCREAM | Molly and Ethan’s trip for ice cream is marred when she gets an anonymous note – “I know what happened to you. Contact soon” – and Ethan throws a fit and maybe murders a bird. At home that night, Molly thinks something is really disturbing about Ethan, shouting, “He approximates a behavior that resembles love, but that’s not love!” and John counters that she’s the one who’s been acting oddly since her return. They make up the next morning, but all is still not great in Casa Woods.

Of all the questions raised in Extant‘s first hour, we get at least one answer. When the shadowy figure once more approaches Molly at trash time, she sees that he’s her former colleague Harmon Kreiger, who allegedly killed himself after his own trip to the stars. And he’s got one piece of advice for her: “Don’t trust them.” Who, exactly, does he mean? “Anyone.” Houston, we have lots of problems.

Now it’s your turn. Are you as intrigued by Extant as I am? Grade the premiere via the poll below, then hit the comments to back up your choice.