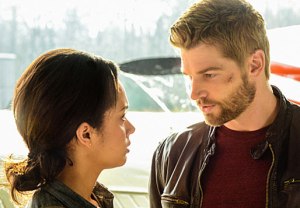 On Monday’s installment of Under the Dome, the CBS drama revisited a question that’s not addressed nearly as often as it should be: When will Chester’s Mill run out of resources?

The town has suffered a water shortage and an energy crisis in the past two weeks — because, yes, the dome has only been down for two weeks — and this time around, the big worry was a shrinking food supply.

Cue the town’s butterfly population laying countless eggs, producing caterpillars that chow down on every crop they can find. And, of course, Angie’s murderer is still roaming Chester’s Mill, while Big Jim continues to believe he is The Chosen One, as is Big Jim’s way.

With so many questions (still) unanswered, here are three things made clear during “Infestation”:

1 | ANGIE’S KILLER IS A “HE”…
Naturally, once news of Angie’s death begins to spread, a few key suspects emerge — Big Jim, Junior and Melanie (aka The Girl From the Lake) among them. And although Melanie’s presence at the crime scene makes her Public Enemy No. 1 in Chester’s Mill, she assures Julia that something beyond her control lured her into the school, and she saw a man there who must be responsible for Angie’s death. Later, Julia — who apparently learned how to perform an autopsy during her reporter days — works with Sam to examine Angie’s body, and they find fingerprints also indicating it was a male that committed the crime. So put down that gun, revenge-seeking Joe! Melanie is presumably innocent — creepy and wide-eyed though she may be.

2 | …AND THE “HE” COULD BE JUNIOR
Since we’re only two episodes into the season, I’m not so convinced that Junior is to blame for Angie’s death. But throughout Monday’s hour, Junior confesses that he got drunk and blacked out around the time Angie was killed — and he also has her bracelet under his bed, which was conspicuously missing from her wrist when her body was found. Utterly distraught, Junior visits his Uncle Sam (heh) and confesses what he may have done. (Personally, my money’s on Sam himself. A character who suddenly emerges after two weeks, has a connection to the dome and seems willing to investigate a murder that he could have committed? I’m going all in on this theory!)

3 | REBECCA IS NOT TO BE TRUSTED
When the town’s resident (and seemingly only?) teacher realizes the crop damage that caterpillars can cause, she takes it upon herself to burn an entire field in an attempt to spare the food supply. And although she seems like one of the good guys, her blind allegiance to Big Jim and zeal for population control indicates otherwise.

Oh, and here’s a bonus takeaway: Big Jim is getting more insufferable by the minute. When he’s not singing the dome’s praises for saving his life, he’s blathering on about being chosen to protect the entire town, and every moment of adversity is seen as a test from the dome. By episode’s end, the entire congregation at Angie’s funeral is shouting “Amen!” after his every sentence, and his head has gotten so big, it practically gets lodged in the church doors.

Of course, there are plenty of other questions still looming about life in Chester’s Mill. For example, when will Julia’s “monarch” status be revisited for more than one scene? Will we see more of Junior’s mom painting in the city anytime soon? Why is Junior always so shocked when people accuse him of hurting Angie? And where is Norrie’s other mom now? We’re dying for some answers here, Dome.

What did you think of the episode? Hit the comments with your thoughts.