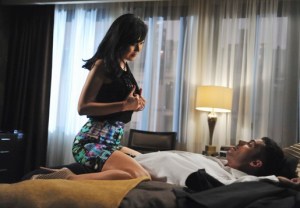 Nobody came right out and said it, but this week’s installment of Mistresses implied that our favorite hot mess Karen Kim is presently operating at such a supercharged sexual frequency that her decision to engage in some sizzling hotel-room foreplay caused an earthquake across the greater Los Angeles area.

To paraphrase Mick Jagger, she makes a grown man cry (out like a frightened toddler), then hide for cover beneath the bathroom door frame. The only problem with sex that good? Sometimes all the writhing and whatnot dislodges your assumed identity from your brain, putting a new spin on shouting “What’s my name?” during intercourse.

But Karen’s not the only one bringing tears to men’s eyes. This week found Savi causing her attentive lover Dom to stop, gawk and ¡whoa! at her possible betrayal; Joss making Harry get misty with a scrapbook of watercolored memories; and April shutting down a skeevy dad at her daughter’s school — without even stopping to lick the chocolate frosting off his index finger.

So, let’s recap the action from the hour, while raising key questions about each of our titular Mistresses.

KAREN | The Character Formerly Known as an Award-Winning Psychiatrist kicks off the episode with her favorite pastime — meeting a sexy stranger at a bar and then checking out the “amenities” in his room upstairs. “Who are you?” he asks, as she throws him down on the bed and gets a closer look at his duvet cover (definitely a euphemism). A few nights later, that same handsome gentleman rescues her from some lout with a horrible pickup routine by pretending to be her tardy hubby. He wants dinner. She wants “dinner” (if I’m not being too subtle). And so they wind up back in his room where something big registers on the Richter Scale (not a euphemism) and Ben winds up embarrassed by his show of fear. “What are the chances we can pretend I didn’t just squeal like a little girl?” he asks, with a mix of self-deprecation and suaveness that makes Karen go “hmmmm.”

When she wakes the next morning, he’s still there, and they’re both in a confessional mood. The last time he woke up with someone, he’d paid for the pleasure of her company, Ben admits. Karen, meanwhile, reveals she was involved with a married man who’d died — and that she can’t shake the feeling that his death was a punishment. “Let’s hope that’s not how the universe works. You can’t help who you love,” Ben says, with just a hint of sadness. And then, after giving Karen his number and saying he’d like to take her on a real date, he’s all, “Bye, Rebecca.” (ACK!) But that’s not even the needle-across-the-record moment. Later, recounting the encounter to April, Karen confesses that, “He thinks my name is Rebecca — or Valerie. [Gasp] I can’t remember!” (Coming up on the next Dr. Phil: Women with too many sexual aliases!) Karen returns to the scene of the hunt, hoping her two-night-stand might have some longevity, but instead, she bumps into (dun dun DUN!) Jacob!

Key Questions: Does Ben possibly maybe think Karen is a working girl who waived her fee because of some kind of Pretty Woman fantasy? Can they possibly build a relationship when Karen doesn’t even know what name she gave him? And if Jacob has also been having hot hotel sex all these months, why didn’t we get to see it with our own eyes? (Asking for a friend, of course.)

JOSS | She might not even be aware of it herself, but Joss seems to be juggling two fellas, no? First, there’s sweet Scott, who’s giving her slingback charm necklaces, helping her polish her silver (not a euphemism), and generally being a good listener about Joss’s work and family woes. “Are we still fighting or can I tell you how cute you two are?” Savi asks, when she stumbles across the new couple. Completing the triangle, though, is Joss’ about-to-be-ex-brother-in-law and current business partner Harry — who’s decided he wants to move back to Australia. Wait! What?! “I just bought a gravy bowl! What the hell, man?” Joss snaps, but then, in perhaps my favorite moment from the episode, she checks herself and puts her friend’s needs first, listens to his plan to take over the beachside seafood shack he loved throughout his childhood. “Do I have to pretend to be happy for you? Well, I am anyway, you jerk,” Joss asks, but there’s a wistfulness in both her and Harry’s eyes that’s more than about saying goodbye to their party-planning business.

Later, when Harry’s sister reveals he’s got “nothing to show for but a bunch of failed dreams,” Joss springs into action, showing him Savi’s secret scrapbooks outlining his successes as a chef. (Joss wearing sequins, and Harry wearing pajamas and bedhead, in this scene makes it particularly emotional for some strange reason.) Joss says she just wants to make sure Harry remembers that guy from Savannah’s Kitchen. Harry responds by telling Joss she’s his “best mate in L.A.” — but he’s going to leave town anyway.

Key questions: I know I ask this every week, but let’s have a snap poll: Do we want Joss and Harry to “go to there”? Or is Scott’s general adorableness the path that our tall drink of blonde should be traveling?

APRIL | April has a low-key week — which means she doesn’t get to lay eyes or hands on Daniel’s “painting supplies.” (Not sure how that’s supposed to be a euphemism, but it is.) Instead, she spends her spare time making Lucy realize why she can’t accept Gucci purses from her BFF’s mom; accepting a dinner invite from the rich bitch in question; and then fending off a second round of sexual advances from the woman’s hella nasty husband. Samantha (Peyton’s mom) proves an unworthy candidate for the Maison Par la Mer coffee group after April’s icked-out reaction to her open marriage results in a flurry of indignation and insults. But later, the woman swings by with an apology bouquet — and a “helpful” bit of intel about having spied a “gorgeous redhead” at Daniel’s art gallery when she went to shop for a little somethin’-somethin’.

Key questions: Are we OK if we never see Samantha, Peyton or Stephen again? Who literally LOL’d when Lucy huffed that April wanted her to return the purse because she “had issues”? (Kids today!) And let’s hear your theories about that dang redhead! WHO IS SHE?

SAVI | Finally, Savi continues her spiral — but it kinda, sorta makes sense considering this is also the week she signs her divorce papers with Harry. But first — pizza and beer, not with Dom (AKA the guy she chose over her ex-hubby) but Zack (her car crash BFF). “What would make you happy?” he asks her. “I am happy.” Savi replies. But then she concedes she’d like a baby — immediatement. Zack, he’ll settle for a motorcycle. (Can we all just admit babies and motorcycles are not the new chocolate and peanut butter?) Savi shares her desire for a child with Dom — and he responds with a truly romantic vision for their future: They should move into a new place (not either of their existing homes), then get married, go on an extravagant trip, and after all that, make a babeh. (I like how this man thinks!) What’s more, he planned that scenario in his head during their first case together. (Considering Savi was happily married, the timing is a little squicky, eh?)

Speaking of said marriage — it finally comes to an end in an emotional scene in a conference room. “I don’t regret everything. I did love you. We had some good times, right?” Harry asks, before adding, “Thank you for believing in me when no one else did.” The former couple hold hands for a moment — and then Harry walks away. But just when Savi finally agrees with Joss that she needs to come clean to Dom about her friendship with Zack, she gets caught in the act — hugging “danger boy” on the sidewalk — just as Dom is exiting a jewelry store with diamond earrings for the future mother of his kids.

Key questions: How messy is this about to get? Is it possible that Zack is actively attempting to ruin Savi’s life — perhaps because he blames their accident for ruining his? Did Savi and Dom’s frank conversations restore some of the heat to their relationship? And post-divorce, is anyone still holding out hope for Savi-Harry?

Quote of the Week
“What am I supposed to do? Let him go back to Australia because the thing that brought him here slept with a coworker, got pregnant with his baby, nearly died in and then, what, chose the other guy?” —Joss, sharing with Scott her concerns about Harry — and, in the process, providing him with a little background on her brother-in-law and sister

Your turn. What did you think of this week’s episode? Are you #TeamScott or #TeamHarry in Joss’ love life? Would you be OK if Harry actually went to the land down under? Hit the comments with your thoughts!