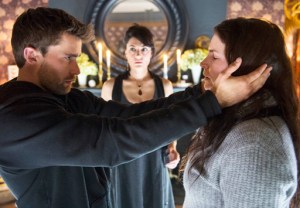 If you watched Sunday’s Witches of East End season premiere, you probably have a lot of questions — mostly about Ingrid’s little walk in the woods. Don’t worry, TVLine has answers.

Before we get into executive producer Maggie Friedman‘s explanations, a quick recap: Joanna’s long-lost son Frederick arrived in East End, and cured her of her Argentium poison; Ingrid used her powers to snag a new job; Freya discovered Dash’s powers, as well as his fury; Wendy made not-so-nice with a stranger known simply as “Herb Boy”; and Killian found himself a new lady friend far from home.

Now, let’s get some answers.

TVLINE | I’m going to start with the question I’m sure is on every viewer’s mind right now: What was that last scene? Was Ingrid dreaming?
[Laughs] Um, no. She’s sleepwalking, and she’s kind of in a trance. It’s a creature who she’s having these encounters with, but she doesn’t remember them. We’ll learn more as the season goes on about who this creature is, why they’re there and what their connection is with Ingrid. It’s pretty sexy, I think. It’s pretty fun. … And God bless Rachel Boston, she was so game to do that. It was pretty weird. TVLINE | Is it safe to assume that was the other thing that came out of the portal?
It is safe to assume, yes. That creature is not from around here.

TVLINE | What should we be calling this mysterious sex monster?
“Mandragora” is what it’s called. There is a real thing called a Mandragora, which comes from “Mandrake root,” but we sort of invented our own version that has all these special abilities. He’s the mythical beast from Asgard.

TVLINE | Ingrid seemed offended when everyone told her she’s safe and reliable. Will she rebel against that this season?
Definitely. Everything she experienced last season — learning she’s the Key, then dealing with Mike — helped her realized that everything she thought she knew, about the world and about who she is, might be wrong. She’s going to be coming into her own, owning who she is and not apologizing for it. And she’ll be taking some risks in a very cool way.

TVLINE | This show has taught me not to trust anyone I meet in a library. What’s up with “Herb Boy”?
Oh yes, “Herb Boy” [actual character name: Ignacio] has an arc on the show. He’s going to be a part of the season and give Wendy a run for her money. TVLINE | Speaking of new guys, on a scale from one to 10, how much should we trust Frederick?
Well, I’m not going to say. [Laughs] If you listen to Wendy, she’d say one; but if you listen to Joanna, she’d put him at about a 9.5. That’s the fun we’re having with his character, taking the audience’s expectations and flipping them numerous times. We’ll keep people guessing about what it is that Frederick wants, and whether he means them good or harm. He and Freya are twins, so they have things they can only do with each other — special spells — so they have a really cool bond.

TVLINE | Now let’s talk about Bianca Lawson, who has been on every show I’ve ever loved.
She was the last person she read for that role, and I was just like, ‘Holy s—t.’ She’s so good, and she’s very beautiful, but she also has so much depth. I think she’s fabulous.

TVLINE | What can we expect from Eva moving forward?
We set up in Episode 1 with the tarot reading that there’s an owl protecting Killian, then at the end, we learn that it’s Eva. So the question becomes: Is she protecting him in order to protect him, or is she keeping people away because she’s a predator? TVLINE | I also love a good stalker mystery. Will Dash’s e-mail storyline be stretched out for the whole season?
It’s a mystery that spans multiple episodes, and it reverberates in the season. Dash is finding himself in some deep s—t, knowing that someone saw and recorded what he did to Killian. There are going to be severe repercussions. He’s in a pickle, and he’s got to figure out how to get out of it. Dash’s journey this year is going to be figuring out who he is and what he can do, and he finds a surprising mentor.

Your thoughts on the Witches of East End season premiere? Grade it below, then drop a comment with your take on the episode, including Ingrid’s sexy Avatar friend.