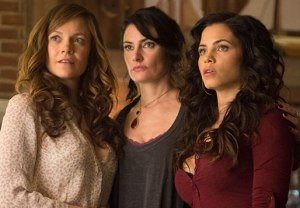 Witches of East End is conjuring up a boatload (sorry, Killian!) of surprises for its second season — a new brother and a new foe, to start — and TVLine got all the scoop from the cast during a recent visit to the show’s Vancouver set.

Sunday’s premiere (Lifetime, 9/8c) picks up shortly after the events of December’s deadly finale, leaving plenty of loose ends for the Beauchamps — as well as their estranged relatives and devoted enemies — to tie up.

FREYA’S MEN | “She starts off this season very confused and heartbroken,” Jenna Dewan-Tatum says of Freya, whose main focus is tracking down Killian, who’s been M.I.A. since she left Dash at the altar. Speaking of which, “there will be lots of interesting dynamics and challenges between [Freya and Dash], especially now that he’s figured out he has powers.” Fortunately, Freya will have brother Frederick by her side, with whom she has “a very strong connection.” But can she trust him? “You’re not sure if he’s a good guy, or if he’s playing a good guy,” Dewan-Tatum notes. “He seems so perfect and so great, but there’s another side of him that — every now and then — flashes out, and we think, ‘Wait a minute. Is he who he says he is?” Also, prepare for Ingrid to feel like the odd sister out, once Freya starts bonding with Frederick: “There’s a lot of sisterly jealousy that might happen.” INGRID’S ‘QUEST’ | After a freshman season of heartache and disappointment, big things are finally happening for Ingrid in Season 2. “Ingrid starts out with a new job … that’s still involving the library,” Rachel Boston teases. “She’s starting to move into a new chapter.” Part of that new chapter will involve exploring her powers more fully, which Boston describes as “a quest … to figure out the depth of her strength.” As for her new sibling, Boston says Ingrid will approach Frederick “with an open heart,” trying to figure out why Joanna never mentioned him.

JOANNA’S MORTALITY | Unlike Ingrid, Joanna doesn’t start Season 2 in a good place. “She’s got the Argentium poison in her body,” Julia Ormond says, adding that the premiere picks up “within days” of the finale. Victor is still by her side — she says their relationship is “good” — but she’ll soon discover that his help isn’t enough to save her.

WENDY’S BIG SWITCH | With a new foe in town, and Wendy being on her last life, Mädchen Amick says her character is “a little more responsible in Season 2. … She’s not afraid of danger, but she’s going to be a little more prepared.” Following the season premiere, which Amick describes as “heart-wrenching,” the Beauchamps will “explore where the witches come from, and why [they’re] here. The Asgard of it all.” But don’t count on seeing Freddie Prinze Jr. back on your screens anytime soon. “I don’t know if they have any plans for Leo,” Amick says, regretfully. DASH’S ‘RAGE’ | “Disturbed,” is the word Eric Winter uses to describe Dash’s state of mind at the start of Season 2. Maybe that’s why he spends most of his time in the attic, which Winter refers to as Dash’s “man cave.” His mother’s death, Freya’s rejection and Killian’s (supposed) death leaves Dash with intense “anger and rage.”

KILLIAN’S ISLAND | “It’s going to be a season of discovery for Killian,” explains Daniel di Tomasso, whose character beings Season 2 far away from home. “Things start happening that he can’t quite understand.” The other twist? “We’re not sure how much Killian remembers.” In other words, Killian thinks Freya is happily married to Dash. “We start the season with him ready to start anew,” says di Tomasso. “He’s got to move on.” As for whether or not Killian will allow his dark powers to consume him, “that’s still up for debate.”

Any hopes or predictions for Season 2? Drop ’em in the comments section below (and be sure to check back after the premiere for the answers to your every burning question.) 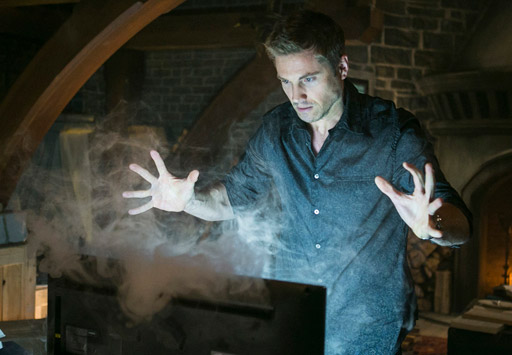