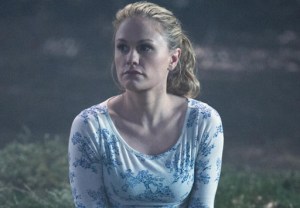 Spoiler alert: This recap contains a major reveal from Sunday’s True Blood, so turn back if you haven’t seen it yet. You’ve been warned…

“Death is a dark and blinding motherf—er, whether you see it coming or not.” Those not-safe-for-the-pulpit words from Reverend Daniels perfectly sum up Sunday’s heartbreaking, game-changing True Blood, which took the life of yet another beloved resident of Bon Temps. (And I’m not talking about Maxine Fortenberry. No one’s laying a flower on that nut job’s grave.)

Desperate to save her friends — and Sam’s pregnant girlfriend — from the basement of Fangtasia, Sookie hatched one of her classic half-baked plans to lure the Hep-V vampires into the open. Bill followed along, mostly to take part in the maiming, but also to spend time with his ex, who’s apparently been having massive doubts about her love for Alcide. “Maybe you’ll grow to love him more,” Bill said, a sentence not even he believed.

Now here’s the craziest part: Sookie’s plan actually kind of worked! Then, without (enough) warning, a bullet pelted Alcide in the forehead, sending his giant naked body tumbling to the ground. Given the opportunity to bring him back as a vampire, Sookie declined, sealing Alcide’s fate forever.

AS HE LAY DYING | Is semi-irrelevant nostalgia a side effect of Hep-V? It must be, because Eric spent the entire hour reflecting on Sylvie, a delightful French gal he used to bang back in the late ’80s. It was right around the introduction of Tru Blood, and Eric’s refusal to go along with the Authority’s plan cost him the life of his sweet, sweet Sylvie. (He was actually forced to choose between saving Sylvie or Pam, and I’ll give you one guess which choice he made).

SHE’S BA-ACK! | The episode also featured the long-awaited — not that it’s been very long — return of everyone’s favorite stiletto-stabbing blonde, Sarah Newlin. She appears to have left her mad days behind her in favor of a deep-breathing, self-reflective lifestyle, but come on, do you really buy that? Either way, yoga won’t save her once Pam and Eric come calling, just as it didn’t save her guru lover. (R.I.P., guru lover!)

ISN’T IT BROMANTIC? | And can we talk about James and Lafayette? Clearly inspired by last week’s Jason-Eric rendezvous, their symbiotic relationship took a major step in a less-than-platonic direction. “Is you groovin’ on me?” Lafayette asked, to which James awkwardly replied, “I’m with Jessica.” (For the record, “I’m with Jessica” is not the same thing as “no.”)

Truebies, how are you holding up after this week’s episode? Bummed about Alcide? Curious about James and Lafayette? Drop a comment with your thoughts on the episode below.