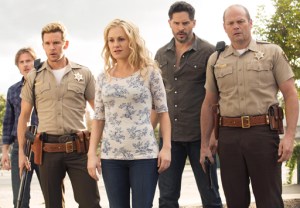 Major spoiler alert: If you haven’t seen Sunday’s True Blood, avert your eyes. Everyone else, read on…

It was the shot no one was saw coming — certainly not Alcide, anyway. Sookie’s werewolf boyfriend took a bullet to the forehead on Sunday’s True Blood, adding another name to Season 7’s rapidly growing list of casualties.

RELATED True Blood Recap: A Shot in the Dark

Below, Joe Mangeniello walks TVLine through Alcide’s death, reflects on his character’s worst moments, then laments the same-sex hookup that could have been.

TVLINE | How long have you known this was coming?
Honestly, I called it as soon as I read the finale last season. [Laughs] There was no way they could keep him around. Sookie has to settle things with the vampire guys, and you can’t have Sookie break Alcide’s heart because then the audience isn’t going to side with her or identify with her. … On a show like this, where you’re looking for vital characters to kill off, you’ve got to take out Alcide. There’s no one that’s going to be upset that he’s dead, except Sookie — and maybe Sam. Those are the only people he’s interacted with ever. He got separated from the herd. TVLINE | Can you recall the moment the producers told you this was going to happen?
Yes, I had dinner with the showrunner, Brian Buckner. I used to have dinner every season with [former showrunner] Alan Ball, where he’d tell me my character’s arc and what to expect. So Bucky came and brought the three scripts with him. It wasn’t some big, dramatic thing; we just sat down to dinner and he said, “You know we’re killing you, right?” and I said, “Yeah, I figured.”

TVLINE | You basically spent Season 6 in your own little Alcide spin-off, then were finally reunited with the main group this season, only to be quickly killed off. How do you feel about the way that worked out?
It was great to see everybody. It was great to feel like I was a part of a show again, like the character had something to do with the show. That was really nice, getting to work with Anna [Paquin] and Stephen [Moyer] and the rest of the gang. I had been feeling a bit like I was on my own and not very important to the storyline.

TVLINE | Hey, you were always important, even when you were off on your own.
I disagree with you, but I think it’s very nice of you to say that. I don’t think I had anything to do with the show.

TVLINE | Alcide was killed by some random hillbilly person. Is there any part of you that wishes you’d been given a more epic death, one that felt like it had some build-up?
Yeah, I guess there’s a part of me [that feels that way.] I just died naked in the woods, killed by some random hillbilly. Then again, I’m glad one of the vampires didn’t do it, because you don’t want any of them having bragging rights moving forward. It would have been great if I’d gotten to kill 40 people on the way to my death; that’s how I would have wanted to go. But I understand we were pressed for time. TVLINE | Sookie was given the option of bringing Alcide back as a vampire, or at least trying to, but she said no. What are your thoughts on that decision?
Alcide would probably shoot himself in the head if he came back as a vampire. Vampires and werewolves hate each other, so for him to lose his werewolf powers and come back as a vampire … I think she did the right thing.

TVLINE | Even though death is ubiquitous on this show, each one has an effect. How do you see Alcide’s death changing Sookie and re-shaping the direction of the season?
In terms of the plot, I’m sure she’ll feel guilty about it, because it was her running off that led to him chasing after her. Story wise, it had to happen. You have to settle the A and B plots of the show before you finish it. You can’t not finish the story between her and Bill; you can’t not have her settle the score with Eric. It’s vital to the show to go down that road. And with this show, you want to shock people and show them that anyone could go at any moment.

TVLINE | As we’ve already seen with Tara this season, dead doesn’t always mean gone. Is there a chance we’ll see Alcide again, maybe in a dream or a flashback?
[Laughs] Well, I had to go out and promote my documentary La Bare, then go shoot a movie called Tumble Down with Jason Sudeikis. If you’ve been following my tweets and know where I’ve been, you can probably guess the answer to that.

TVLINE | Will we, perhaps, see you again on another show? Is that something you’re looking to do?
Well, I’m about to film a new movie in August that I’m really excited about, I just shot that movie with Jason Sudeikis that’ll hit the festival circuit at some point this year and I’ve got Magic Mike 2 in the fall. I missed my opportunity on several movies while I was on the show, which were brought my way because of the show. But they were straight offers that I couldn’t do because I couldn’t get three overlapping days off from shooting. And then I had to go to the theater and watch someone else play it. … So right now, the focus is on film, but that’s not to say that if the right thing came up with the right people, I wouldn’t want to be a part of it.

TVLINE | Looking back at your time on True Blood, is there anyone you didn’t get to work with that you would have liked to?
Over the years, I think I worked with pretty much everybody. I was sad that the opportunity to have a substantial storyline between Alcide and Emma, the little wolf, wasn’t explored. Alcide was adamant that he didn’t want to have children because he didn’t want to pass on that gene. But the fact that he orphaned that little girl by killing her father, I think there was a missed opportunity there to really explore something. Him trying to work through that karma by awkwardly showing this little girl how to be a werewolf, I thought, would have been a wonderful storyline. I was also sad that Robert Patrick [who played Alcide’s father] and I never got into any kind of depth with our storyline, showing why the two of them didn’t get along. [The producers] had something planned for us, but unfortunately, it was one of the casualties of the showrunner switch of Season 6. My storyline was completely … I mean, there was no storyline. It was just gone. All of a sudden, I was just beating up a bunch of girls. It was weird. I was like, “Come on, man, Rocky is going to be up Adrian now?” I don’t know what was going on there. There was this really textured, interesting relationship in those last scenes with Robert Patrick that were killed. We even shot some of them, but they were junked in order to make this “Alcide is an a—hole” storyline. It was odd. Comic-Con was weird that year, too. The fans were confused, and I was confused, too. I didn’t know why that was happening either, but obviously there was a situation going on higher up the ladder that we all had to bare with.

TVLINE | After last week’s scene with Eric and Jason, we realized that Alcide has never found himself in a same-sex situation. In your mind, who would have been the most likely candidate for that?
I have never actually imagined that. I thought that when they had Alcide drink the V at the end of Season 5 to beat up J.D. — which was really confusing after he was so adamant about not drinking blood — that it was going to be Eric Northman’s blood, and we’d have some sort of scene, but they never went there. If they wanted to do that with Alcide, they definitely missed their shot.

Truebies, do you agree that Alcide’s death was necessary? Drop your thoughts on the loss of Sookie’s furry boyfriend below.