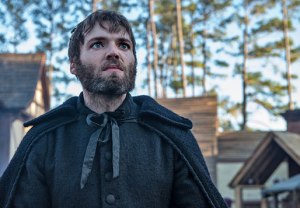 Cotton Mather is doing his best to defend the people of Salem against witches, but will he able to save John from the town in tonight’s episode (WGN 10/9c)?

TVLine caught up with the man who plays the good reverend, Seth Gabel, and talked about Cotton’s character development, his unravelling relationship with John and that time he peed on Shane West.

TVLINE | Set up Cotton’s journey heading into the penultimate episode of Season 1.
Episode 12 is the battle scene for [Cotton]. It’s where I face my father in the courtroom, defending John Alden. Increase wanted me to join his side and prosecute John to elevate my own status in Salem. I rejected that and told him I’m doing things my way. So it’s me going face-to-face with him, fighting for John’s life. Because [John] has secrets in his past, those get used against him. In a town that’s ready to call anyone a witch, this kind of secret can get you killed.

TVLINE |Now that he’s defending John in court, are we going to see Cotton sober up?
Sobering up is definitely difficult for Cotton. He’s so used to having a crutch, whether it be Gloriana or drinking. Without either of those things, he’s forced to experience the harsh realities he’s living in. But we saw in the last episode that Anne Hale, who’s going through her own stuff right now, is pretty inspiring to him. I love that last scene in that episode where she shows him kindness. Cotton is so used to associating kindness from a woman with sex that he tries to kiss her afterward. He’s beginning to wake up to the fact that you can nurture yourself, you don’t need to rely on alcohol or sex or someone else to give you validation… So we’ll see Cotton on that journey, but there’ll definitely be bumps along the way.

TVLINE | Cotton’s really changed since the series premiere. He’s become much more grounded. How do you feel about his transformation?
He’s definitely waking up to his reason. In the episode where he takes off his shoes and goes into the woods and sees a butterfly come out of a skull, that’s where he transforms from a puritan into a transcendentalist thinker much like Thoreau or Emerson. He’s still confused now, but we’ll see him become more of a man of reason and his own spirituality, as opposed to religion and law. It’s something I’ve tried to co-ordinate with the costume designer on the show. We’ve seen Cotton go from wearing black and being the ultimate Puritan in the beginning of the season and transitioning into wearing brown, where he’s in full naturalist mode.

TVLINE | The town hasn’t been hesitant to kill folks. Are there going to be any more deaths as we head into the final two episodes of this season?
It really gets physical now. There’s this supernatural nuke ready to go off, which is the Grand Rite. [Cotton’s] father, who is evil in many ways, brings up this good point: “How many lives is it worth taking if you’re going to save a bunch more?” It’s very much like a Jack Bauer, 24-type dilemma. Brannon Braga, the showrunner, was a writer on 24, so we talked a lot about this Jack Bauer-type energy in the show. But this is a society that genuinely believes in hell and heaven and doesn’t believe the life we’re living now is the end of everything… If you need to kill someone now, in your mind you’re either going to hell or heaven. It’s a difficult circumstance because we’re trying to stop hell from being unleashed on Earth and we’re going to have to break a few eggs along the way.

TVLINE | Mercy and Tituba, two real witches, were accused in the last few weeks. Now that Cotton’s more sober, will he figure out those accusations are true?
It’s possible, but his father’s really taking a lead on that. There are bigger fish to fry. We know the Grand Rite is almost complete and that we’re close to the required number of innocent deaths. At this point, it almost doesn’t matter who the general witches are, we need to know who’s running the Grand Rite and where the Mallum is so we can stop it.

TVLINE | John and Cotton’s friendship has come a long way since the pilot. What do you think of their relationship? They really like each other. At first they were diametrically opposed, but they have learned that they have more common ground than they anticipated. But what’s difficult is that through the trial process, Cotton is going to feel betrayed by his friend, because some truths will come out that he didn’t know about… If the stuff about John Alden is true, then who knows who he really is or what he’s capable of. What if he really is a witch and we didn’t know it and he’s been pretending this whole time? They’re constantly taking two steps forward, three steps back — and through this trial process we’ll see a few steps back.

TVLINE | Given his friendship with John, do you think Cotton would be able to kill Mary once he finds out she’s a witch?
He likes Mary and is definitely sexually attracted to Mary. But if he found out she’s a witch, she’s done.

TVLINE | Cotton peeing on John was such a hilarious moment. What was shooting that like?
That was so much fun. They rigged this hose that I was using to pee, and because of the way the hose works, sometimes it would dribble out at the speed of which pee normally does and sometimes it would just shoot out like a fire hose. There was one take where the director had just told me to get it as close to Shane as possible, and so I aimed pretty much right at his back and it shot like a fire hose. He arched his back like someone would look in a movie as they’re getting shot. That is one of the finer memories that I’ll have for the rest of my life. I’d like to think I’m a mature person, but I don’t think there’s a take [from the] peeing [scene] where I wasn’t genuinely laughing.