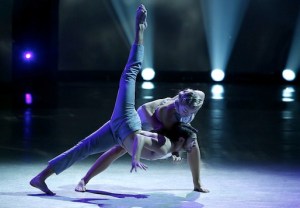 The term “religious experience” gets thrown around a little too much nowadays. We hear it used to describe food, art, sex — even sports.

So You Think You Can Dance‘s Season 11 Top 20 performance episode, however, legit served up white doves and incense flowing out of an Italian cathedral door — courtesy of a contemporary routine from Ricky and Jessica that may go down as one of the greatest moments in show history.

“That just came from heaven,” exclaimed judge Mary Murphy, momentarily jumping off the Hot Tamale Train to get on her knees and give thanks for having witnesses something so utterly graceful, so profoundly felt, so indelibly moving.

When I meet people at parties who scoff at the idea of a job that requires me to devote my days and nights to obsessing over and diligently chronicling reality-competition series, from now on, I’ll just smile inside and think about Ricky and Jessica’s number (choreographed by the always terrific Sonya Tayeh). What better reminder that a genre defined by voters’ whims, judges’ biases and frequent interruptions by Charmin bears with toilet paper stuck to their backsides can still transport us to somewhere completely magical?

Do we give credit to God? Do we tip our hats to the energy of our universe? Do we simply marvel in the experience of witnessing world-class human achievement? Maybe it’s all the same. But for those of you who watched SYTYCD tonight, I doubt you’re questioning the hyperbole of this recap, instead just nodding your heads and shouting “Mmm-hmm,” “Yes, sir!” or “Amen!”

Tonight’s Top 20 performance telecast paired every single dancer with someone from his or her own genre — and then allowed them to be choreographed in a routine that showcased the duo’s speciality. (Next week, the contestants will be mixed randomly and forced outside their comfort zones.) I appreciated the decision on the part of executive producer Nigel Lythgoe, especially since the abbreviated callbacks round this year left me feeling as if I wasn’t especially well-acquainted with at least a third of the finalists.

With no individual dancer completely imploding, however, next week’s cuts will sting. But before I take a turn down Sadness Street, let me offer some quick impressions of the 10 routines we witnessed:

Dance of the Night: Jessica & Ricky (contemporary) | Oh no I’ve gushed too much. (I haven’t gushed enough.) But a couple of questions: Did Ricky levitate during that move that began with him wrapping himself around Jessica’s legs? How did he manage to arc his leg so high up above his back without spraining his butt? (Can a butt be sprained? Surely I’d end up in the ER if I attempted Ricky’s extension.) And weren’t Jessica’s leaps every bit as thrilling as her front-runner partner? I hate overhyping anybody off one live performance, but it’s hard to imagine this pair doesn’t crack the Top 6 at minimum.

Runner-Up: Malene and Marcquet (samba) | This may not have packed the emotional wallop of Jessica and Ricky, but in terms of fleetness of footwork and non-stop hip action, it was darn near perfect. Nigel made a great point that Malene was exploding with intent from her very first step, while Marcquet and she both brought to life a full-fledged Carnivale vibe without ever dipping their bread into the fondue pot of cheese, so to speak.

Most Overrated: Casey and Emily (contemporary) | I’ll admit I winced at the use of the ubiquitous “All of Me” — an unconditional love ballad — to accompany what Travis said was a dance about a stormy couple facing their most testing moment. The bigger problem, though, was Casey’s occasional vapid smile creeping into the mix — and perhaps the fact that Emily, despite some lovely lines, didn’t really mark herself as being particularly memorable.

Most Surprising: Bridget and Stanley (contemporary) | I’ll admit Bridget did not impress me much (yes, that’s a Shania shout-out) in her audition or Hollywood week, but in this Bonnie Story routine, she matched Stanley’s eye-popping extensions and athleticism. Like Nigel noted, you could see the classical technique and meticulousness in every one of the couple’s steps. Plus, both halves of the duo sold the relationship angst at the center of the story — never moreso than during the move that Mary so accurately dubbed the “love rolls.”

Most Disappointing (Even If I’m Not 100% Sure Why): Jacque and Jourdan (ballet) | I didn’t love that Jourdan and the barely-seen-til-tonight Jacque were dressed and styled almost identically (the harder to separate their quality of movement). And I didn’t love that the camera too frequently focused on one gal or the other. Yet the bigger problem was that despite the extraordinary execution of what Nigel counted as 15 fouttes, the routine seemed to lose energy — and synchronization — in the latter half, with neither gal matching the charisma of Season 9’s Eliana or even Season 5’s Melissa. I wouldn’t be shocked if one of these ladies gets axed next week (though the less heralded Jacque seemed slightly more engaged).

Worst Chemistry: Nick and Tanisha (cha cha) | I’m not sure Nick looked at Tanisha a single time during the performance — so focused on mugging for the camera was he. Why the judges made no mention of it is a mystery as deep as Fox’s failure to have already renewed SYTYCD for Seasons 12, 13 and 14. Tanisha proved marginally better, but on a night of stellar performances, hers isn’t one I’ll ultimately remember.

Triumph of Spirit Over Technique: Carly and Rudy (contemporary) | Is there anyone on the planet more adorable than Rudy? (I’m going with a solid “Hell, no!”) The judges were correct in noting he might not match the extension or flexibility of the season’s finest guys, but he brings a passion and commitment that make him a delight to watch. Carly, meanwhile, aided by gusting fans and a gorgeous dress, seemed to become one with the ethereal music. I hope guest judge Jason Derulo is right, and that neither dancer will be at risk of elimination.

Most Fun: Emilio and Teddy (hip-hop) | Teddy didn’t quite match Emilio’s eye-popping tricks — and his makeup wasn’t doing him any favors, either — but watching the duo’s janitor-and-security-guard hijinks to “Nightshift” was a sweet break from the onslaught of contemporary and ballroom. Bonus points for utilizing their respective desk and mop/bucket combo in a way that was seamless and never distracting.

Least Inspiring Choreography (No Fault of the Dancers): Brooklyn and Serge (cha cha) | Why is it that so few of SYTYCD‘s ballroom choreographers ever “tell a story” or take us somewhere emotional with their routines? Honestly, a little context or setup could make all the difference. So, while Brooklyn and Serge ticked the boxes for footwork, agility and sexual connection, I fear the mundane quality of Dmitry Chaplin’s routine will put them at risk next week — a particular shame in the case of charismatic Serge.

Biggest Gap Between Partners: Valerie and Zack (tap) | Zach was pretty mesmerizing gliding his way up and down a set of prop stairs, but poor Valerie spent half the routine looking down at her feet — as if she was deathly afraid of taking a tumble. Even when they were on the floor, though, Zach seemed to take two steps (or a step and a half) to every one for Valerie. As a result, methinks he’ll have more longevity over the course of Season 11.

What did you think of the Top 20’s performances? Who will and should be at risk? Who’s going home? Take our poll below, then sound off in the comments!