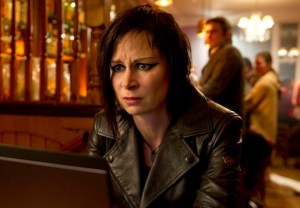 And just like that, Fox’s 24: Live Another Day switched gears, swiftly segueing from this season’s primary narrative engine to a (slightly) different one, with three TV hours now left on the clock.

Oh, and there was that whole “return from the dead” thing, too.

As the hour opened, it was promptly revealed that — as some/many of us suspected, President Heller was not in fact blown to smithereens by the Wembley Stadium missile, but instead was rushed to safety as Chloe hacked into the drone’s video feed to play POTUS on a loop.

Ian Al-Harazi however spied this glitch/ruse before destroying the final drone. That set up a ridiculously thrilling, edge-of-your-seat sequence of about 10 minutes, as Chloe (with an assist from Adrian) pinpointed Margot’s hideout, paving the way for Jack, Kate et al to storm the place, where they were met with heavy fire. With hallway access to Margot’s lair not available, Jack raced to the roof, grabbed some crackling electrical cables and proceeded to rappel down the side of the building, nearly sneaking up on Ian and his mum. Ian, however, fell for the old “lean out the window” trick, inviting Jack to yank the punk and hurl him down to the pavement far below, with a splat.

Jack then climbed inside and put a non-fatal bullet into Margot before taking control of the drone’s already-fired missile, which was on target for a major metro station. And by hook or by crook, Jack was able to sink the missile into the Thames.

For good measure, he then lobbed Margot out onto the street below, with another satisfying splat.

Crisis over! Will Fox fill the remaining three hours with Dads repeats…?

RELATED Glee Bosses Reveal Finale-Season Theme, Confirm ‘There Will Be a Lot Going On In [Spoiler]’

Er, maybe not. And this is where the Dirty Navarro/Jordan Reed subplot dovetails with the bigger picture. Now that Reed’s body has been found (and in the company of a trained killer), Navarro knows the heat is on, so he makes a deal with his mysterious puppetmaster (aka Adrian): safe passage outta town in trade for the override device that was used to hijack the drones. (Turns out, this gizmo can be used to hack any defense system.) So, when Jack is briefly distracted in the CIA bunker, Navarro KOs the DoD techie analyzing the device and then absconds with it — but rest assured, Jack is in hot pursuit!

Meanwhile, Chloe — fresh off giving Jack a “Dear John…” phone call — meets back up with Adrian, with whom she has patched things up. (Sealed with a kiss, even! Knew it.) But little does she know that the “friend” of his they are about to pick up is a traitorous CIA station chief, toting tech that could give Open Cell immeasurable access to destructive villainy.