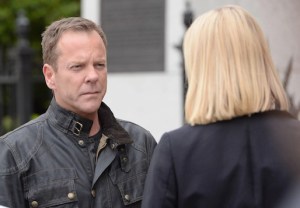 Thus far on Fox’s 24: Live Another Day (Mondays at 9/8c), events have, as is tradition, “occurred in real time” — meaning, only seven hours have elapsed to date, with 17 more to pass across five more episodes.

But every one of those 17 hours will be accounted for by the time the finale fades to black on July 14, executive producer Howard Gordon confirmed for TVLine during a Friday conference call.

Gordon however would not elaborate on the nature of the time jump (e.g. Does someone take a plane flight somewhere?) or whether there would be multiple skips in time over the coming five episodes. “We’ve been sworn to secrecy,” he hedged.

TVLine also asked Gordon and series co-creator Robert Cochran if, should 24 return again in one form or another, Kiefer Sutherland might pass the baton, leaving, say, Yvonne Strahovksi’s spunky Kate Morgan to fight the next good fight.

“I think it’s a possibility,” Cochran allowed. “There are no specific plans right now, but that’s the kind of thing we’d consider.” Added Gordon: “The format itself is very sturdy and with the right story it can be compelling. So if a [Jack-free] story presented itself to us, we would be open to it.”

All of which leads to the larger question: Could there be more 24 in Fox’s future? “We learned to never say never,” Gordon said during the call, “but I think everyone is feeling the appropriate bruises and wear-and-tear that the show takes. So right now is probably not the best time to answer that question!”