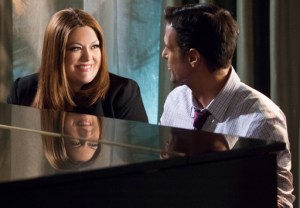 Lifetime’s Drop Dead Diva dismissed its final case Sunday with a romantic twist that longtime fans of the series never would have imagined when the show first began.

Before diving into executive producer Josh Berman‘s explanation of the series finale’s ending, let’s quickly recap how things left off for the Harrison/Parker gang: Stacey went into labor before her wedding to Owen, resulting in the birth of their twins; Kim represented Dave in court, eventually admitting her feelings for him; and Jane and “Ian” lived happily ever after.

And now, let’s get some answers… TVLINE | I feel like having Jane end up with “Ian,” rather than Grayson, was kind of a bold move after six seasons.
Well, there’s a clear message in this series. It’s about falling in love with someone’s soul. Grayson fell in love with Deb in Jane’s body, so it made sense for Deb — as Jane — to fall in love with Grayson in someone else’s body.

TVLINE | Did you anticipate that some fans might not be happy with that ending?
I hope the fans will understand why the series is ending this way. Thematically, it makes perfect sense.

TVLINE | How did Jackson Hurst feel about not appearing in the final few episodes?
I discussed the plan with Jackson last year, and his exact words were, “Hell yes!” He understood what we were trying to do with the characters, and he was very much on board. I love Jackson. I’m very close to him. I went to his wedding. I wouldn’t have written the ending this way if it would offend or hurt him in any way. He loved the storyline we gave him.

TVLINE | In your mind, what’s next for Jane and “Ian”? Might she start her own firm, with him on board as a paralegal?
I love this question. If another network is interested in picking up the show, I would be happy to tell that story. I love Drop Dead Diva. I love these characters and I’m sad to say goodbye to them. TVLINE | Stacey and Owen’s wedding was interrupted, but is it safe to assume they eventually went back and tied the knot?
Another good question. I think it is safe to assume — but with twins, they might be too busy to plan another big wedding. They love each other, and they are a family now. Stacey is happy, Owen is happy and I am happy.

TVLINE | What were you hoping to achieve with this finale, and do you think you were successful?
The show has come full circle. Deb and Grayson are finally together, although they are both in different bodies. True love has prevailed.

What did you think of the Diva finale? Any loose ends you wish had been tied up? Drop a comment with your review below.