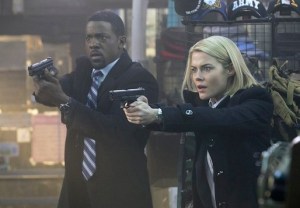 NBC’s Crisis burned off to a close on Saturday as the ill-fated drama’s final two episodes unspooled back-to-back. Did Francis Gibson end up paying for his ghastly crimes, not the least of which was his hairstyle? And which parent went to extremes in the name of meting out justice?

All told, the final stretch of the midseason hostage thriller was a bit of a chess match, between Gibson and the unknown someone who wound up pulling his strings, demanding that he “self-destruct” by using the occasion of a nationally televised vigil for his mysteriously re-abducted daughter Beth Ann to confess his role in the Ballard crisis.

Gibson, however, was having none of that, literally scoffing at the notion of “confessing” to anything. We then see him take a sledgehammer to his basement floor, to unearth a chest of supplies… but to what end?

Later at the vigil, Gibson thanks First Son Kyle for getting his VIP folks to attend the service. President Devore, mind you, is aware of the suspicions surrounding Gibson, but fears how it would look if he dissed the man who took a bullet for his son. With Finley and Dunn on hand and keeping a watchful eye on Gibson, there’s a brief fake-out where they fear the prayer candles have been tampered with. Little do they know, the damage has already been done — Gibson had laced one of his nine fingertips with a toxin that, after he shook hands with Kyle’s mom, soon subjected FLOTUS to a fatal stroke.

Gibson is ultimately taken into custody, but not before he had set in motion a series of automated texts to Amber, sending Meg’s “daughter” and her classmate Ian Martinez on a series of errands, seemingly in the name of saving Beth Ann. But after a rather ridiculous showdown at a pawn shop (where Amber donned one of those rubbery masks and held a shotgun on the proprietor, because you wear the mask when you hurt people!), Dunn realizes that the common element between Amber and dead FLOTUS is Meg — meaning, her own sister took Beth Ann.

Gibson has already realized same, we learn, and after using a fake tooth filled with knock-out gas to give his Secret Service escort the slip, he meets up with Meg at her family’s old cabin, killing some helper of hers before putting a bullet in Meg’s own belly. Meg though has the last laugh, as Gibson goes inside the cabin and — after a super clumsy passage of time, from dark of night to insta-sunshine, marked by a fast-motion sunrise (!) — discovers that Beth Ann has been made privy to his role in the school kids’ abduction. Gibson tries to lie his way out of the sitch, but Beth Ann’s not buying it — especially because he’s holding a gun on her, and he then aims it at her bean once Dunn and Finley barge in (without any backup, because, y’know, Susie has to handle this on her own). After the feds ultimately gun Gibson down (though not fatally), Susie points out to her wounded sis that, well, she did kidnap someone, but Meg’s happy to have brought Gibson to justice.

But is Gibson’s reign of terror not quite over? Just before the series fades to black, he lets slip a slight smirk in the back of the ambulance, as we see his computer back in the cellar send out another mysterious text….

What did you think of NBC’s Crisis? Would you have entertained a second season?