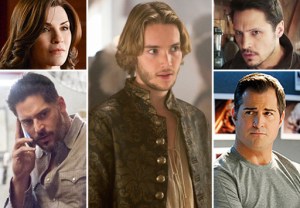 Question: Got any scoop for season 2 of Reign? —Nicole
Ausiello: “Any” might be an understatement, Nicole. French Court is going to be visited by four new faces in Season 2, including Princess Claude, the never-before-seen daughter of Catherine and Henry. The “very sexually advanced” young lady will get herself into plenty of mischief, perhaps even more than Narcisse, another (much older) new face who will serve as a sparring partner for her mother. Then there’s Conde, known as the “Prince of the Blood,” who will strike up an unusual friendship with Francis, as well as Prince Thomas, who “may be the next king of France sooner than he’d imagined.” If that last line has you shaking in your boots, you have a very healthy sense of fear.

Question: You mentioned last week in Ask Ausiello that Revenge is adding a new love interest for Emily — anything else you can share about the new guy? —Janet
Ausiello: He’s a childhood friend of Jack’s who has a touch of PTSD from his military days. He decides to make his short-term visit to the Hamptons permanent after something life-changing happens to Jack, then makes fast friends with a number of the locals — including Em.

Question: Is George Eads returning to CSI this season? After what happened last season — missing some episodes — I was just wondering if he re-signed this year. —Connie
Ausiello: Good news, Connie. A CBS rep tells us that Eads remains a series regular going into Season 15.

Question: Have you heard if Eric Johnson (Luke) will be returning to Rookie Blue at all this season? He always adds a little bit of tension and fun to the episodes he’s in. —Christy
Ausiello: Bad news, Christy: An ABC rep tell us Johnson will not be back during this XL season.

Question: I’m well aware I’m one of the very few who watched and enjoyed Mind Games, but take pity on me — is there any chance ABC will burn off the remaining episodes/make them available some other way? —Caitlin
Ausiello: It’s Games over as far as ABC is concerned. I’m told the network has no plans to run the unaired episodes (not even online). However, 20th TV (the studio behind the show) is said to be exploring several digital options with regard to the show. The smart play here, Caitlin, is to move on and never again admit publicly that you enjoyed Mind Games.

Question: I am super excited that Meagan Tandy is returning to Teen Wolf this season as Braeden. Any scoop on what she is up to in Beacon Hills? – Gyll
Ausiello: You’re not the only person excited, Gyll. Executive producer Jeff Davis is thrilled to have Tandy back on the show for Season 4 — this time, in an increased capacity. “She’s in nine of the 12 episodes,” Davis tells us. “She’s someone who’s kind of on the moral fence … and she’s actually hired by Peter and Derek to find Kate.”

Question: Any scoop on Nashville‘s upcoming season? –Sharon
Ausiello: While Hayden Panettiere tells us she enjoys opening her script and being “as shocked as everyone else is,” her gut is telling her that the forecast for Juliette and Avery will remain stormy heading into Season 3 — despite her character’s tear-streaked explanation/apology for cheating with smarmy record exec Jeff Fordham. “I don’t think any route is going to be simple, because that just wouldn’t be interesting,” Panettiere speculates. “At the end of the day, though, when you lose trust in someone in a relationship, that’s a very difficult thing to get back in a way that doesn’t cause incredible conflict, insecurity and jealousy. I can’t imagine Avery being the kind of person that just forgives and forgets.”

Question: I just binge-watched Hannibal and now I’m obsessed (not surprising because Bryan Fuller is a genius). I’ll take any scoop you have. —Rebecca
Ausiello: When asked which mortally wounded characters — his Will Graham, Laurence Fishburne’s Jack, Caroline Dhavernas’ Alana and/or Kacey Rohl’s Abigail — might survive Dr. Lecter’s violent Season 2 capper, series star Hugh Dancy says with a laugh, “That’s the million-dollar question.” He then ventures, “We have definitely got a history on our show of people surviving against all the odds — and I think to some extent that will continue. I mean, we don’t need to do a Game of Thrones. I do see the appeal and the great realization in television that ‘Oh, we can kill people, we can lose people — as in life!’ But then there also can be a bit of a swing back in the other direction where you say, ‘That doesn’t mean we have to.’ Especially in our show, which is one step above reality.”

Question: During her Reddit AMA, Marlene King said she wants to do a “Ravenswood episode” on Pretty Little Liars this season. Anything more you can tell me? I miss that spin-off. — Claire
Ausiello: Plans for a Ravenswood-centric episode are indeed underway, but King tells me nothing has been finalized. “I stay in touch with all of those people, both the kids and the adults,” she says. “They know we’d love to — I don’t want to say ‘tie up’ the story — but at least give it some closure. More than we were allowed to, anyway. We were heading somewhere with that story and we want to let the fans know where that was.” Question: I want to know more about this new-and-improved Reese on the last season of The Newsroom. They’re not going to make him nice, are they? — Jonathan
Ausiello: I wouldn’t worry about that, exactly, based on what Chris Messina recently told TVLine. “I must come off as a dick right off the bat, and people warm up to me,” he joked, noting that many roles he’s played throughout his career “have started off as either hated or just not liked, and then you warm up to them or realize there’s another side, which is fun to play.” In the HBO drama’s yet-to-be-scheduled final season, “That happens with Reese,” he shared, but stopped short of saying that Leona Lansing’s son was going to turn into best buds with any of the News Night staff. “You see another side of him.”

Question: Any scoop on what is in store for Alicia and Peter on The Good Wife? I love them together. —Kiki
Ausiello: Julianna Margulies is of the opinion that their marriage will continue to be all business and very little pleasure. “”There’s an incredible respect they have for each other, for their minds, and politically, and as lawyers,” she shares. “But I think in the last scene of ‘The Last Call,’ when Alicia closes her eyes, [it’s similar] to when she slaps [Peter’s] face in the pilot. It was like a slap for her to wake up. I feel like her closing her eyes was her way of saying, ‘I have wasted my time with this guy, and I’m not going to let that happen again.’ I don’t know how you repair the damage that’s done without it constantly rearing its ugly head. I don’t think you can.” BONUS SCOOP: Elsbeth Tascioni is (probably, most likely) returning! “Right now they are talking to me about coming back for another two episodes,” the character’s Emmy-winning portrayer, Carrie Preston, reports. “I would love to go back. I would love to be there full-time. If it were up to me, I would be.”

Question: Any chance Mistresses‘ Joss might go back to being a real estate agent? I kind of miss that crazy scene. –Billie
Ausiello: Alas, it looks like the show’s resident wild child will be sticking with her new party-planning business in Season 2 — but that doesn’t mean she’ll be dialing back on the glamour! (And yes, I spelled glamour with a ‘u’ — because it’s more exciting that way.) “I tried to influence Joss’ style with my style — effortless jeans, T-shirt, throw on some funky jewelry with great heels or a bag and be done with it,” says Jes Macallan, discussing her character’s career change. “But it got a little casual. So the network was like, ‘push push push!’ for all the fashion. We pumped it back up — so I’ve got some crazy outfits later this season.” Question: Do you have anything on House of Cards? —Mark
Ausiello: All My Children’s Christina Lind (pictured, right) will appear in the Netflix drama’s upcoming third season, but the show’s Mad Men-esque veil of secrecy prevents me from telling you who she’s playing.

Question: I’m glad Lincoln and Octavia both survived The 100 finale. Please tell me they’ll stay together next season. — Dahlia
Ausiello: Nothing is set in stone for Season 2 just yet, Dahlia, but feel free to interpret executive producer Jason Rothenberg’s words as you will: “Lincoln and Octavia have a genuine romance, and to me, that’s the romantic heart of the show. It’s a union between the Grounders and the people from the Ark, which is really where we’re going next season.” (Does anyone else hear the pitter-patter of baby Grounder feet?)

Question: Do you have any scoop on True Blood? —Charif
Ausiello: The table read for the series finale took place earlier this week, and there wasn’t a dry eye in the house, Stephen Moyer confirms. “People turned up that we hadn’t seen for ages — [series creator] Alan [Ball] was there,” he tells TVLine. “We’re sitting in the same room we’ve been reading in for seven years… that stuff’s really deep.”

Question: I’ll take anything you’ve got on the final season of True Blood. —Nina
Ausiello: Joe Manganiello, who spent much of last season starring in what felt like some kind of weird Alcide spinoff, is back with “the core group” in Season 7, the actor confirms. Of course, being in a serious relationship with Sookie Stackhouse will do that. “He is domesticated [and] living in society,” reports Manganiello. “He isn’t the wild crazy wolf-guy anymore. [Sookie and Alcide] go to church on Sundays. He has to wear a blazer. He lives in gran’s house. He’s got a to-do list for the house. It’s different life for him. But it is what he has always wanted. He finally got the girl and he got the life. Now the only problem is that there are these marauding Hep-V pyscho vampires destroying the world. There’s gotta be something.”