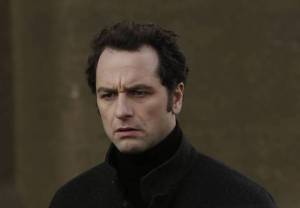 The Americans‘ Matthew Rhys is a master of disguises.

But in Season 2 of the FX drama, the actor brought the man behind the wigs and fake mustaches into focus as Russian spy Philip Jennings struggled to reconcile his duty to the Motherland with the emotional toll of the job.

Then, when his onscreen daughter Paige developed a troubling interest in organized religion, Rhys — via Philip — unleashed the kind of unbridled fury that triggers instant Emmy buzz (not to mention a Dream Emmy nomination from TVLine.) With any luck, that buzz will translate into an actual nod for the underrated actor.

TVLINE | You’re a Welshman playing a Russian man playing an American who is sometimes playing another person. Do you ever feel like you’re going to lose your mind?
I actually don’t. I initially thought that may be the case. The truth is, I just sort of simplified it for myself, really, by remembering that Philip is just a foreigner trying to convince people that he’s American. And that’s something I did on a TV show called Brothers & Sisters for five years. So it’s actually something very close to my heart. You’re just trying to convince as many people you’re American. I keep that simple notion in my head.

TVLINE | Has mastering all the disguises and the different personas that Philip takes on gotten easier now that you’re in your second season?
It’s a fine, tricky balance, really, because the temptation or attraction is trying to be as transformative or chameleon-like as possible. The danger of that is you want to be with a limp and lisp and the big beard and everything. But it can become caricature or cartoon-like. If a witness were to work with an artist, you just need a few key elements to throw the witness off. So the disguises themselves, I think, shouldn’t really be transformative in that way. And really, you’re trying to convince the person in front of you, so you want whichever character you’re playing to be as genuine as possible so the person in front of you — as well as the audience — believes it as an entity. TVLINE | Is there one particular disguise that you get excited about if you see it in the script?
Yeah, there’s one that I’ve named Fernando. He has long, brown shoulder-length hair and a goatee and mustache. He’s become just a favorite of mine for many reasons. He has the most elaborate backstory and a very distinguished voice. So I just get a kick out of pretending to be him. [Laughs]

TVLINE | Looking back over the season, what was the most difficult scene for you to shoot?
[In Episode 9, “Martial Eagle,”] when I confront the pastor about his relationship with my daughter. It was just pitching the tone correctly. You don’t want to go in as some raging psycho, but you want there to be an element of play. It was an alignment of a number of things and just trying to get it right I found difficult.

TVLINE | In that same episode, you had this very powerful scene where you had to yell at Paige (played by Holly Taylor) and rip apart her bible. What was it like to blow up like that in front of your younger costar?
Pretty awful, actually, because I decided in the moment…that I wouldn’t really tell her how I was going to react or what I was going to do. So I did explode on her, and in that moment, you have the out-of-body experience where you see that you kind of startled someone a little more than you should have. It was a real shock to her. So the reaction was amazing and real, but not without its consequence. You feel like a jerk for frightening a 16-year-old.

TVLINE | It was very startling for the viewer, too, because even though Philip is a spy and he kills people, he is rarely that outwardly volatile, especially at home. Even when he kills people, it almost seems like he’s doing it reluctantly.
There is a reluctance to him. I think at this point, he hates that aspect. I keep going back to the fact that they were like kids who were indoctrinated when they really didn’t know any better or any different. Now he’s at an age where he realizes this isn’t his calling. He is at a crossroads as to what he is doing and who he is doing it for and that weighs heavily. Now the act of the killing has more to do, for me, personally, with the survival of [his] family. He has to do this in order to not get caught so his family will survive. It’s a different set of rules.

TVLINE | There was a very memorable scene in the season premiere where Paige walks in on Philip and Elizabeth in bed. What went through your head when you saw that in the script?
I certainly went to the writers and I questioned them about it because I wasn’t sure about it. Elizabeth is coming back from recovering from this gunshot wound, and it was the first time we were seeing them together… [But] they had a set of criteria — they needed it  to be something startling for Paige, [and] that was what they went with. TVLINE | When you think about Philip and Elizabeth, do you ever imagine what their ending is?
Yeah, all the time. Because I think Season 2 proves there’s a real steady, loud tempo that’s forever getting louder and faster to their lives. The danger is getting closer and louder all the time. So they are very aware that this isn’t going to last. There needs to be a drastic change, [whether] that’s going to the feds or becoming double agents or triple agents… Because if they don’t, I think they’re going to end up dead soon.