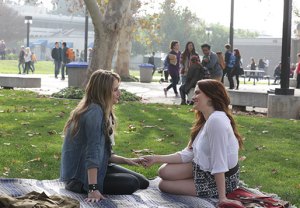 No one at Hester High is Faking It anymore as the MTV drama’s freshman season comes to a close Tuesday at 10:30/9:30c.

RELATED | Faking It Renewed For Season 2

But what’ll happen when the truth about the school’s perhaps not-so-faux lesbians, for lack of a better phrase, comes out?

TVLine caught up with Rita Volk and Katie Stevens, who play Amy and Karma respectively, to discuss “Karmy” and the possibility of a happy ending for Hester’s cutest couple.

TVLINE | Are you excited for the finale?
STEVENS | I’m super excited. I think that we’ve all been waiting for this. Everything is finally coming to fruition.

TVLINE | Could you preview it for our readers a little? I know that it takes place at Bruce and Farah’s wedding.
STEVENS | You’re going to see some feelings come out. There’s going to be some dancing, some Liam and Karma, some Lauren and Shane. Everybody’s storylines are going to spill out and unravel.

TVLINE | How is Amy handling the wedding? So far we’ve seen that the process has been pretty hard on her.

VOLK | She’s definitely the black sheep of her family. Obviously she loves her mom, but her mom is very different from her… Farah has obviously been married before – as we will find out in the episode, because there’s a reference to her [previous relationships]. So Amy doesn’t really have that father figure that we know of right now. She’s just kind of going through the motions. This is just her opportunity to have a good time with her best friend.

TVLINE | And how is Karma doing? She’s lying to one of the most important people in her life.
STEVENS | She knows how Amy feels towards Liam… and that’s why she keeps [her new relationship with him] from Amy. It’s not one of those things obviously written, but it’s not one of those things she would never tell Amy. I think she’s just waiting for the right time. But she’s there and she’s in support of Amy and she wants to be there to be a good friend to her. And of course Liam has to show up and ruin the whole thing! TVLINE | Could you talk about that moment a little? Obviously that’s a huge one.
STEVENS | It’s one of those things that’s bound to come out. It’s been a whole build-up from the moment that the kiss happened at the Homecoming assembly, until now. It’s been a build-up that people have been waiting for.

TVLINE | Amy feels pretty sure that Karma has feelings for her. How is she feeling going into this episode?
VOLK | Well in the previous episode, we see that she’s trying to convince Karma that she does have these feelings for Amy. When they’re being questioned by Vashti, she says, “Sometimes we hide things that we really feel.” Which is her way of saying, “I know you have these feelings for me. You just have to discover them.” So it’s not really in her actions. She’s trying to convince herself that Karma has the same feelings. I was trying to figure out if that was her just being in denial, or if she really, really believes that.

TVLINE | Can you tease any other Amy-Karma moments in the episode — other than the big reveal of feelings?

VOLK | There’s dancing! There’s a really fun dance scene that Karma and Amy do.
STEVENS | It’s good to have those moments between Amy and Karma that take them away from that whole storyline of them faking being lesbians and show their friendship. This was a dance that was created to be a dance they’ve been doing since they were little together.

TVLINE | What about Liam and Karma? He does crash the wedding.
STEVENS | What happened in Episode 7 brought their relationship to a different level, and it shows that they’ve been spending time together and their relationship and their feelings towards one another are genuine. It’s not the biggest behind-the-back, hook-up thing any more – which may anger fans. But it shows Liam in another light, because everybody’s kind of been anti-Liam. It shows that he actually cares for Karma. But of course, everything is going to unravel.

TVLINE | Would the girls’ friendship be able to overcome Karma not returning Amy’s feelings?
VOLK | We don’t know… Everything is going to come out [in Season 2], and we’ll see. I think it would be very difficult. Karma is obviously put into a very, very difficult situation and Amy’s just bared her soul to her best friend, and that’s a very difficult thing to do. I’m just as curious as you are.

TVLINE | How is Lauren doing during this episode? We’ve seen her and Amy really butt heads over this wedding. Are they on the same side now? STEVENS | I don’t know if they’re on the same side, but I think they see each other in a new way and have a new respect for each other.
VOLK | They are sisters, after all! I would like for them to get along. It’s also fun because sisters fight. And Bailey [Buntain] is such an amazing actress, and her character is so funny. She’s so good as a complete bitch, and it’s so much fun to watch. I hope there’s a happy medium, where they’re not constantly fighting but they’re also not really, really close because I think we’re going to lose some of that humor. But I’m excited to see how that relationship grows.

RELATED | Teen Wolf‘s Latest Victim Speaks Out: Why I Asked to Leave the Show

TVLINE | Shane is at the wedding, as well. Does Amy go to him for any advice?
VOLK | She doesn’t confront him with advice. I think all the advice that he gives her is in her head. And let’s just say that he’s given her some conflicting advice. So she goes into Episode 8 with pretty much everything Shane has ever told her, and then we watch it play out.

TVLINE | How will fans feel about the finale? Is there a cliffhanger ending?
STEVENS | There’s definitely a cliffhanger for absolutely everyone.
VOLK | People are going to freak out. Everything starts to unravel for every character. Everyone faces the repercussions of their actions. And in Season 2, everyone will deal the consequences of their actions.

What are your hopes for Faking It‘s finale? Drop a comment with your thoughts below.