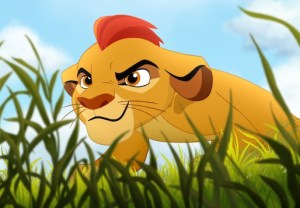 Almost 20 years to the day that The Lion King first roared into theaters, Disney Junior has announced its plans for a follow-up TV-movie and series.

The Lion Guard — which will be geared toward kids age 2-7 and debut as a movie in fall 2015 before going to series in early 2016 — follows Kion, the second born cub of Simba and Nala, as he leads the titular group, which is tasked with preserving the Pride Lands. But rather than assemble a team of young lions to serve alongside him, Kion enlists a fearless honey badger, a confident cheetah, a happy-go-lucky hippo and an intellectual egret.

The Lion King franchise’s Mufasa, Timon, Pumbaa, Rafiki, Zazu and Kion’s older sister Kiara, the future Queen of the Pride Lands, can be counted on for occasional drop-ins.

News of the series was first reported by The Wall Street Journal.

“The story of The Lion King has deeply touched families around the world since its original theatrical release 20 years ago,” Disney Junior Worldwide EVP Nancy Kanter said in a statement. “We look forward to introducing a whole new generation of kids to both the Disney legacy characters and to new friends and heroes.”