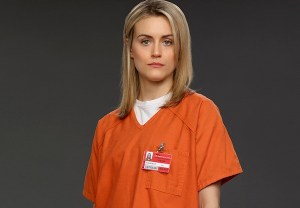 Listen up, inmates! The entire second season of Netflix’s Orange Is the New Black becomes available Friday at midnight, and I’ve got a little welcome-back-to-Litchfield care package for you.

I’ve watched the first few episodes and humbly offer up a few tidbits of info, which hardcore fans know is just as valuable as a pack of cigarettes or some name-brand estrogen pills.

Now, if you don’t want to know anything about the latest exploits of Piper, Alex, Crazy Eyes and the gang until you’ve blasted through all of the episodes, get thee to the prison yard immediately.

Everyone else, read on for scoop re: the cell-block newbies, lingo you’ll want to know and what happened after that Season 1 cliffhanger of a brawl.

CHANGING PLACES | The first episode takes place almost completely outside of Litchfield and focuses on two characters, but we’re back at the penitentiary – with the rest of the crowd – by Episode 2.

ON THE VISITOR’S LIST | Jodie Foster (The Silence of the Lambs), who directed Season 1’s “Lesbian Request Denied,” is back to helm a Season 2 episode.

NEW FACES | As previously reported, Lori Petty (A League of Their Own) and Lorraine Toussaint (Any Day Now) appear in the new episodes; both show up early in the run, and one plays somebody with connections to several characters we already know well.

WHERE’S ALEX? | Laura Prepon’s slightly reduced presence in Season 2 is addressed in the first episode… and in a way you might not expect.

WORDS OF THE DAY | You’ll be introduced to the words “poochie” and “cliterference.” It’s probably best not to throw them around, willy-nilly, at work.

DISTURBIA | One character gets some very bad news, which causes her to cry, “You don’t go Jessica Simpson when you got Rihanna!”

RELATED | Orange Is the New Black Renewed for Season 3

GOD BLESS US EVERY ONE | Though the series doesn’t immediately pick up with Piper and Pennsatucky’s Christmastime fisticuffs, we do learn exactly what happened on the night of the holiday play.

MORE THAN A TASTE | Taystee, who has a more prominent role in the action this season, experiences a win – and then a letdown – sometime in the first three episodes.

WE WERE ON A BREAK! | Larry has some (possibly not-kosher) intrigue of his own going on back in Brooklyn.

RUT-ROH | One Litchfield denizen is gone this season. Explanation from one of the inmates? “It got weird.”

Are you planning to paint your weekend Orange? Got guesses as to who’s referred to above? Sound off in the comments!