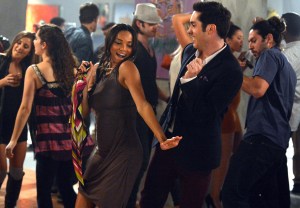 You can’t believe everything you read. I mean, the way the media has been portraying it, those sexy mutants from X-Men: Days of Future Past (along with other ubiquitous big-screen characters) qualify as this summer’s most indispensible superheroes.

But riddle me this: Can Prof. Charles Xavier deliver 10 tons of glamour (while perched on dangerous Louboutin pumps) during weekly visits to the gravesite of a deceased young lover? Mistresses‘ Karen Kim can!

And when it comes to chugging Cabernet, shaking one’s groove thing and catching the eye of a hunkrageous sculptor (whose newest medium happens to be wood — ahem), Captain America’s got absolutely nothing on the ABC sudser’s April Malloy — and honey, he’d better not even try!

Best of all, you don’t need to pony up $15 (not even counting snax!) to party with Mistresses‘ quartet of protagonists — lest you think we’ve snubbed her, Alyssa Milano’s saucy Savi Davis possesses the power to shout “I object!” and get tipsy off two sips of champs. So, without further ado, let’s recap the action from the Season 2 premiere — aptly titled “Rebuild” — while raising key questions about each of our titular Mistresses.

KAREN | Let’s start at the very beginning — and with the hottest hot mess to ever hold a psychiatric license in the state of California. The episode opens eight months after the Season 1 finale, with Karen visiting the gravesite of Samuel Grey — the college student who Karen bedded (after sleeping with the kid’s terminally ill, married dad). Yep, when Karen and Sam’s mom both reached for the gun (as they say in Chicago), the young hottie turned out to be collateral damage. (Sniff. #RIPHotStalkerBoy) Karen’s now working as an emergency-room psychiatrist, purposefully “avoiding intimacy” and lying to her own shrink about having put the kibosh on her graveyard visitation habits. But then she meets Anna, a young woman with ligature marks around her neck and wrist, who’s claiming her boyfriend is to blame. “He’s just into the whole asphyxiation thing — it’s not that twisted,” Anna huffs, and Karen makes her absolute best decision in 14 episodes by deciding Anna needs to be hospitalized overnight for further observation. When the young woman freaks out the next day about the idea of getting a new therapist, however, Karen suddenly gets inspired to leave the hospital setting, return to private practice and explore Anna’s issues. Let’s just hope our cray-cray mental-health provider isn’t sitting in her minimalist apartment doing a Google image search for “the whole asphyxiation thing.” I mean, whatever seems illogical and possibly unethical seems to draw Dr. Kim like a toddler toward the siren call of the ice-cream truck.

APRIL | April’s gay BFF Mickey returns from Italy, excited that he no longer needs to help April finance Maison Per La Mer, but insistent that she begin to use her fabulous home-furnishings store to bolster her own artistic vision. One thing leads to another, and the duo are dragging Joss, Savi and Karen to a pop-up art show (emphasis on pop-up, if I’m not being too subtle). Yep, across the room, April spies one of the hottest men ever to sculpt a piece of wood into a deeply feminine shape. “Oh my Lord,” April gasps, reiterating the sentiments of 90 percent of the viewing audience experiencing the vapors from the sight of Daniel’s white Henley/leather vest combo (and everything underneath it). Because she’s the show’s practical voice of reason, April downs Joss and Karen’s drinks and declares, “I’m having feelings!,” and her subsequent conversation with Daniel includes awkward silences, plus this doozy: “I also buy for my house, but I sell from my store.” (Noooo!) Daniel seems more intrigued than concerned about April’s tipsy chatter and the next day, when she visits his studio, he sculpts the clothes right off her body in a scene so chemistry-heavy, it must’ve been written by a Ph.D. Naturally, when April heads home, she channels her lust into sanding down a boring white desk and beginning to decorate it in mosaic fashion. Would that we all had such “artistic inspiration” in our lives. Yowza!

JOSS | Joss begins the season still living at Savi and Harry’s soon-to-be-sold home, but she’s now exploring the world of party-planning instead of real-estate. And while celeb client Soleil Moon-Frye opts not to use her services, the missed opportunity does lead to Joss trying to find a regular caterer, a job for which Harry volunteers himself. Joss isn’t so sure the potential percolating drama is a good idea, but Savi offers her blessing to the partnership — “if it makes him happy, that’s all I want.” Now call me evil, but did the chemistry-detecting voice inside of me begins to wonder of we’re about to witness Joss doing the horizontal mambo with her soon-to-be ex-brother-in-law?

SAVI | While the show’s opening scenes turn into a carefully choreographed ice dance of misdirect, we eventually learn the following: In the eight months following her brutal car accident, Savi has wrapped up physical therapy, and is now looking to “carpe diem [her] face off.” And while she lost Dom’s baby in the midst of the medical horror, her first stop post-physical therapy involves a trip to her erstwhile illicit lover’s place — and their first sexual encounter since that fateful night where Dom impregnated Savi on her desk. “I was nervous,” says delectable Dom, proving there’s no amount of crunches that can entirely quash internal insecurities. Savi seems to be having a blast, but she’s still harboring reservations about returning to her law firm — despite loving a high salary and the ability to cross-examine folks. For now, she settles on a sexy, beach-hair makeover, but the episode ends with a double-whammy. First, she finds out Harry is now dating Kyra With the Fun Bags (™ pending) — the hostess at his now defunct Savannah’s Place restaurant. And second, that “Toni the Time Suck” at Dom’s office has a penchant for barely professional tangerine-sorbet-colored minidresses.

“Honey, balls is what I do best.” –Joss, assuring client Soleil Moon Frye she’d be willing to go “balls to the wall” in planning an event

“Blanche, Dorothy — zip it. Rose and I have business to attend to.” –Mickey, telling Karen and Joss (or is it Joss and Karen) that he and April need to hit the dance floor without any added chatter

“Oh my God, the new Savi takes selfies.” –Joss, after her sister texts her a photobooth snap alongside her youthful new pals

“Yup, that’ll do it.” –Harry, revealing that girlfriend Kyra has found a way to make morning sex special by taking a trip down to South America on his body map

“It’s kind of like how Angelina used to be the chick who made out with her brother, and now she has like 100 kids and speaks out for breast cancer.”
“It’s exactly like that.”
–Joss and Karen, discussing the formerly flighty pal’s new role as “den mother” for their group

What did you think of the Mistresses Season 2 premiere? Which of our four ladies is getting the most intriguing setup? And on a scale of one to “Smokey, we’re about to have a forest fire up in here!”, how hot is Daniel? Take our poll below, then hit the comments with your thoughts!