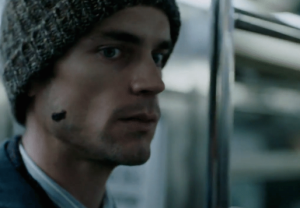 THE SHOW | The Normal Heart

But while White Collar‘s ridiculously gorgeous Matt Bomer lost an astonishing 40 pounds to play Felix Turner, a New York Times reporter who succumbs to AIDS in the earliest days of the epidemic, his most affecting moments were hardly dependent on achieving a bone-thin physique or submitting to the magic of the film’s make-up artists.

In fact, some of Bomer’s strongest work in The Normal Heart came when Felix was in full possession of his physical beauty.

Take, for example, the scene in which Bomer’s Felix finally divulged a life-changing secret to the indignant, outspoken writer Ned Weeks (Mark Ruffalo), with whom he’d fallen in love. It began as a tender, tentative foray into the subject of the health crisis affecting New York’s gay male population: “If I had it, would you leave me?” asked Ned. “I don’t know. Would you, if I did?” Felix replied gently, Bomer’s eyes suddenly betraying a palpable sense of dread.

But after a heated argument over Ned’s need to fight against everything (and everyone) trying to render him powerless in life, Felix quietly revealed the small purple lesion on his bare foot — “It keeps getting bigger and bigger, and doesn’t go away” — and Bomer unforgettably unveiled the mixture of terror, shame and heartbreak that accompanied the telltale sign of Karposi’s sarcoma. The moment was a gut-wrenching, multiple-Kleenex reminder of the disease’s tragic human toll.

In a later scene, an AIDS-ravaged Felix took a subway ride, lesions fully visible on his face, and Bomer’s remarkable eyes gave us a window into a character navigating the unimaginable horror of accepting a new reality as one of society’s outcasts. Fighting for his dignity, avoiding the pitying glance of a fellow passenger, Felix then glimpsed his future — another AIDS-afflicted passenger whose face morphed into that of a ghost-white corpse amidst the train’s flashing bursts of light and darkness. Bomer played the scene with the necessary notes of fear and anxiety, but also with a subtle, stubborn determination that furthered the film’s narrative — and tapped into the audience’s own raw emotions — in a way mere dialogue never could.

Yes, Bomer’s a beautiful man — as the final season of White Collar and the inevitable Magic Mike sequel will remind us — but he’s also capable of astonishing us with his internal gifts, too. Hopefully, Emmy voters will remember that fact when their Emmy ballot arrives next month.

HONORABLE MENTION | In seven seasons as Mad Men‘s Bertram Cooper, Robert Morse lent both gravitas and quirk to the fictional ad firm that bore his character’s name. Whether he was eschewing shoes (those socks!) or quietly offering a voice of reason during a partner’s meeting, Morse often played Bert like a weary sentinel biding his time until the end of his duty. And when that time came in Sunday’s midseason finale, Broadway vet Morse capped his SC&P days with a sublime performance of “The Best Things in Life Are Free,” complete with a sock-footed dance number. It makes sense to mark Mad Men‘s final season with the final day of one of the agency’s founding fathers, but we’ll miss you all the same, Bert.